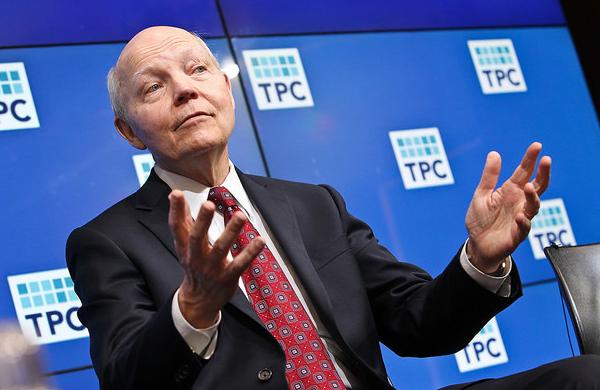 (Alexander Hendrie, ATR) Congress is expected to soon consider a resolution to impeach IRS Commissioner John Koskinen. All Members of Congress should vote yes and prove their commitment to holding the out-of-control IRS accountable to the American people.

Koskinen was first appointed head of the agency promising reform and transparency. At the time, it had recently been discovered that the IRS had been conducting a coordinated effort to apply improper, politically motivated scrutiny to tea party and conservative organizations. This resulted in just one conservative non-profit being granted tax-exempt status over a three-year period between 2009 and 2012.

Since then, Koskinen has failed to reform the IRS, with the agency becoming increasingly politicized. Under Koskinen, the agency destroyed several sources of Lois Lerner’s emails, while he gave numerous false statements to Congress under oath. Koskinen even failed to attend hearings into his malfeasance.

In his time leading the IRS, the agency has consistently failed to responsibly allocate resources and has failed to safeguard taxpayer data. The IRS may even still be unfairly selecting Americans for an audit “based on an organization’s religious, educational, political, or other views,” according to investigations conducted by the Government Accountability Office (GAO).

Members of Congress should vote yes on the resolution to impeach Commissioner Koskinen and hold the agency accountable to the American people.

Throughout the investigation into this scandal, Koskinen’s IRS continually failed to provide important information or perform basic due diligence. For his part, Koskinen’s statements before Congress were frequently misleading:

The supposed carelessness of the agency means that important information is no longer available to congress because of the actions of IRS employees, while the countless misleading statements has caused investigations to drag on for years.

Koskinen failed to appear at a May impeachment hearing examining allegations of his misconduct despite an invitation to testify from the House Judiciary Committee.

According to the IRS, Commissioner Koskinen did not have time to “fully prepare” because he was traveling in China. The agency claimed that he was not given enough notice of the hearing, despite having more than a week to prepare.

Koskinen and other IRS officials have claimed the agency is underfunded. One even claimed that the agency was “struggling to keep the lights on.” But the facts say otherwise – the agency has proven time and time again that it cannot be trusted to wisely spend taxpayer dollars.

In fact, the IRS is unable to justify its spending decisions, according to a report by the independent National Taxpayer Advocate:

“the IRS has come under scrutiny by external oversight organizations who have questioned the IRS’s rationale for its budget decisions. They have not been satisfied with the IRS’s response to their inquiries.”

This has not stopped agency officials from complaining, or from making further poor spending decisions.

For example, the agency made the costly (and perhaps illegal) decision to hire a litigation-only white shoe law firm for over $1,000 an hour over an audit of Microsoft. As noted by Congressional investigators, the agency has 40,000 employees dedicated to enforcement efforts and access to the IRS office of Chief Counsel or a Department of Justice attorney for audits. Instead the agency chose to hire an expensive law firm for at least $2.2 million.

The IRS has also been caught wasting over 500,000 hours, or $23.5 million a year on union activities, and gave 57 contracts worth a total of $18.8 million to corporations that had federal tax debt or a felony conviction.

Under Koskinen, the IRS has failed to protect taxpayer data despite numerous warnings from watchdog groups.

A recent report by GAO noted that the agency had a “significant deficiency” over its ability to ensure taxpayer financial discourse is not exposed.

Physical security controls designed to protect sensitive IT housed in restricted areas were not been properly implemented, the agency continued to use unsupported software to manage taxpayer data, and personal data was not properly encrypted.

The IRS even failed last year to prevent a data breach that left taxpayer information belonging to more than 600,000 taxpayers stolen. The agency first claimed just 100,000 filers had been exposed, and then revised it to more than 300,000 taxpayers, before doubling the number months after the hack was first disclosed.

Following the initial announcement, Treasury Inspector General for Tax Administration (TIGTA) Chief J. Russell George revealed that the IRS failed to implement 44 recommendations that would improve the IRS’s ability to protect taxpayer information from hackers. Of these 44, ten recommendations were over three years old.

Since 2007, the IRS has been officially warned at least seven times by watchdog groups that it needed to strengthen its protections of taxpayer information. Most recently:

Americans for Tax Reform is a non-partisan coalition of taxpayers and taxpayer groups who oppose all tax increases. For more information or to arrange an interview please contact John Kartch at 202-785-0266 or by email at jkartch@atr.org.