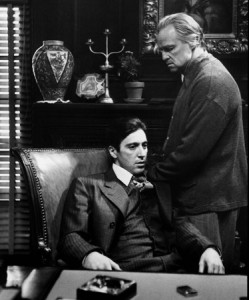 (Ron Knecht & Geoffrey Lawrence) – Why is The Godfather so popular among conservative men?

A Mafia film with some famously violent scenes and dealing with the problems of a family of criminals?  A story that ends with the underworld boss fully in control after dispatching his enemies with extreme prejudice?

True, the earnest opening lines are: “I love America.  America has made my fortune.”  An awesome beginning, but that’s not the reason.

Much of the reason lies with the backstory we heard about how Francis Ford Coppola came to produce and direct the film and co-author its script with Mario Puzo, who wrote the book.

In 1970, Coppola had already co-scripted Patton, another great film beloved by conservatives.  While still not rich, he was a hot young film-maker.  He worked in San Francisco and was looking for digs in wealthy Marin County, across the Golden Gate from The City.  Marin was the center as much as anywhere in the world of hip culture of the ‘70s.

He was part of a crowd that liked to crash many weekends from Friday to Monday at some group member’s home and party as folks could only in Groovy Marin.  Dope, food, booze, coupling, hot tubs, music, whatever.

One weekend, a young woman in the group who was known to give good party, sat curled up in a corner of a back bedroom all by herself throughout the entire event reading Puzo’s book.  Coppola had seen other young women seemingly transfixed by this best-selling book at the time.  He asked her what charm a gangster novel could possibly hold for someone of her sophistication.

And she gave him the answer that captured perhaps its most important character and a key theme around which he organized the film.  She said simply: “It’s about family.”  So, he took up a book he otherwise would not have read.  He saw she was spot on.  And there were other really great aspects of the story.

Paramount Pictures was looking for someone to make the movie.  Despite his Sicilian-American bona fides and a good resume for a film-maker in his early thirties, including some feature-film directing and much writing, he hadn’t yet directed or produced a major picture.  At first, he had reservations about taking it on, too.

Paramount already had two name-brand directors in its sights, but they passed and he was hired.  His hippie appearance didn’t help with some of The Suits, however, and the relationship was rocky throughout.  But he prevailed on casting, setting, mood and other artistic choices, and he emphasized the theme of family.

The essence of the story is family, as the aging Don Vito Corleone seeks to groom his oldest son Sonny as his successor in empire and to shield his youngest one, college boy and war veteran Michael, from all the family business so he can go legitimate and become perhaps senator or governor.

But Sonny is an arrogant, imprudent hothead who ultimately thereby gets himself gunned down.  Second son Fredo is stupid and feckless, allowing the old man to be shot.  In their time of need, Michael steps forward to take control in key situations requiring diligence, care and judgment.  Protecting the old man who is recuperating in a hospital bed, Michael whispers, “I’m with you now, Pop,” and the Don knows he can be trusted to lead the family prudently.

Among the most touching scenes are those of a recovering Pop assiduously mentoring Michael to become the new Godfather and Michael just as eagerly learning.  All that is essential when the climax comes, and it allows Michael to prevail.

There’s lots more about family, involving both Michael’s brothers and the women in his life.  And Pop’s insistence that: “Any man who does not spend time with his wife and children cannot call himself a real man.”  It’s all catnip for conservative men.

Further, as reflected in the end of Part II, this is thoroughly a morality tale.  Michael has again prevailed over many enemies and is wealthy, but feels like he has a mouthful of ashes.  The words of his former crime partner explain Michael’s paradox: “This is the business we have chosen.”