Why the establishment fears Trump 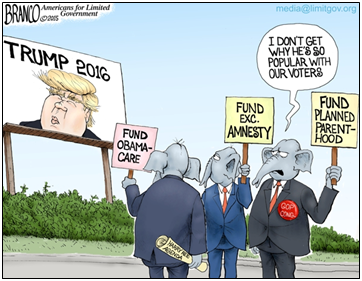 (Robert Romano, NetRightDaily.com) – Critics of a Donald Trump presidential candidacy have made two separate, contradictory claims regarding his electability in the 2016 general election.

How can both be true? Either, Trump has broad appeal to Independents, which could fuel a third party run, or he does not.

Let us assume the latter conventional wisdom, that if Trump were to run as an Independent, it would splinter the vote, dramatically increasing the odds that the Democrat nominee would win. For this to be true, he would have to attract enough Independents to his campaign to steal votes from one or both of the major parties.

Ross Perot did that in 1992, garnering 19.7 million votes in the general election. Let’s leave aside the question of whether this actually cost George H. W. Bush the election, a debatable topic. Roughly half of Perot supporters were voters who otherwise might not have voted in the election. How do we know that?

Voter turnout exploded in 1992 by nearly 13 million to 104.4 million, a 12.27 percent increase from 1988. All that while the growth of the voting age population was slowing down — it had only increased 6.7 million that cycle.

In addition to Perot’s 19.7 million votes, Democrats increased their 1988 vote total by 3.1 million to 44.9 million, while Republicans lost 9.7 million supporters down to 39.1 million.

Meaning, Perot’s presence in the race may have brought as many as 5 to 10 million voters to the polls who would have stayed home if he were not in the race. He expanded the voter universe.

Besides the dramatic growth of the national debt, Ross Perot’s big issue in 1992 was being against the pending North American Free Trade Agreement. Trump’s big issue besides illegal immigration is trade, as he led the opposition to granting trade authority to President Barack Obama to negotiate the Trans-Pacific Partnership. Both are economic populists.

Only two other times in modern electoral history has there been such a marked increase in voter turnout exceeding the growth rate of the voting age population at a time when the population growth rate was slowing. In 1984 and 2008, when Ronald Reagan and Barack Obama, respectively, increased their party’s voting bases and, thus, overall voter turnout substantially.

In 2000 and 2004, the growth of voter turnout also exceeded the growth rate of the voting age population, but that occurred at times when the voting age population was surging. That said, the George W. Bush campaigns were highly successful at increasing the number of Republicans. In fact, Republican voter identification peaked in 2004 at 39 percent, according to Gallup.

The trouble for Republicans is that it has sunk ever since, down to 23 percent in July. Independents, on the other hand, have risen markedly to near an all-time high at 46 percent of voters.

What emerges is a Republican Party that is — or should be — desperate to increase its numbers with unaffiliated voters after getting drubbed in 2008 and 2012. In fact, Republicans still have not been able to surpass George W. Bush’s 62 million vote total in 2004.

The question with Trump — and every other GOP candidate — is if that person will build the voter base of the party, without which Republicans cannot hope to win in 2016. A key question may be whether they bring the Ross Perot voters home.

A hint could come in a recent Rasmussen poll, which found a full 36 percent of Republicans, 33 percent of Independents and 19 percent of Democrats say they would support Trump — even if he ran third party. His threat to run as an Independent notwithstanding, that is not a bad place to start.

Perhaps what the party’s establishment fears the most, then, is that either as a Republican or an Independent, Trump could actually win. And they can’t control him.