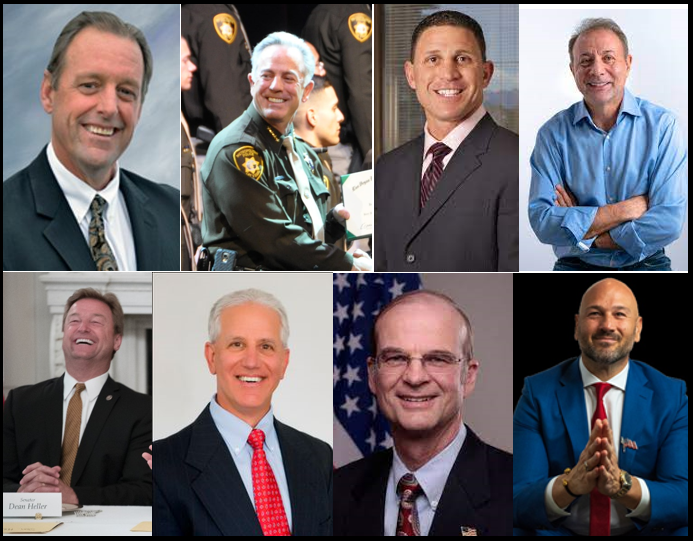 (Chuck Muth) – Steve Sebelius, Politics and Government editor for the Las Vegas Review-Journal, wrote a column this morning characterizing the Republican Party’s crowded primary fight for the gubernatorial nomination next June as a “nightmare.”

He’s got a point…one we’ll surely discuss at our scheduled “beer summit” later this week.

Yes, the various GOP candidates are gonna beat each other up.  There will be a sharp tilt to the right on various issues.  And the whole exercise will cost money that incumbent Democrat Emperor Steven von Sisolak won’t have to spend.  Unless…

Unless, as widely rumored, Clark County Commission Chairwoman Marilyn Kirkpatrick decides to challenge His Excellency in the Democrat primary.

That would be a very interesting turn of events.  Prior to his election in 2018, Sisolak was perceived as a relatively pro-business “moderate” Democrat.  But his primary campaign against uber-liberal Chris Giunchigliani forced him to the far left…and he never returned.

It’s no secret that there’s no love lost between Sisolak and Kirkpatrick.  And her reasonably moderate record in the Nevada Legislature, as well as on the commission, would certainly appeal to Democrats who are horrified by the socialist take-over of the Nevada Democrat Party earlier this year under Sisolak’s stewardship.

But let’s get back to the Republicans.  At present, there are five major candidates and at least three minor ones.

Don’t laugh.  Remember, NOTA won in the Democrats’ 2014 gubernatorial primary.  And with the 2022 GOP vote currently being split eight ways, anything could happen.

Lee has extensive governing experience as a former state legislator and as a chief executive of a major city; a city he brought back from the brink of bankruptcy under his watch.  He’s also an actual business owner who knows all about signing the FRONT of checks.

However, he faces a challenge in overcoming the fact that he was a Democrat until earlier this year; a move many Republican primary voters perceive as suspiciously expedient.

I don’t buy that; having known Mayor Lee for over 25 years.  But the primary will afford him the opportunity to allay reasonable doubt about his commitment to conservative principles.

As for Lombardo, while he’s a battle-tested candidate who won two countywide races for sheriff in 2014 and 2018, he’s never been a candidate for partisan office.  The primary will allow him to be fully vetted by grassroots Republican voters on a whole host of issues important to them.

That includes the gun rights issue and the sanctuary city issue.  The GOP primary will afford him the opportunity to clear the air and clarify exactly where he stands.

Gilbert, a first-time candidate, enjoys the most passionate followers of the entire field – thanks in large part to the fact that, unlike the others, he’s been in Sisolak’s face since Day One of the Sisolak Shutdown in March 2020.

His challenge, however, will be in persuading Republican voters that he’s not too far right and can win over moderates and non-partisans in the general election.  To that end, a contested GOP primary will be helpful.

Nohra, also a first-time candidate, has a boatload of money he’s willing to spend.  And as a political newcomer, he’ll have to do just that.  He’s got a classic “American dream” story and an impressive business success story, but almost no one knows about it…yet.

As for Heller, he DESPERATELY needs a competitive primary if he’s to overcome the antipathy so many Nevada Republicans harbor for him.

Over the years he’s flip-flopped all over the map on a wide variety of conservative issues – especially the abortion issue and the issue of repealing ObamaCare when we had the chance in 2017.

As Mr. Sebelius noted in his column, Heller earned the nickname “Senator Spineless” in his failed re-election campaign in 2018; a campaign in which Democrats accurately portrayed him as a windsock blowing back and forth in the wind.

And then there’s his statement in 2016 that he was “99 percent” against electing Donald Trump over Hillary Clinton.  Good luck selling that on the GOP primary campaign trail.  But sell it he must if he’s to snatch the golden snitch.

As for the minor candidates, they need the GOP primary in their quixotic effort to be perceived as a viable alternative to the five major candidates.  Highly unlikely, but hope springs eternal.

In looking at the field, I’d say the real “nightmare” for Republicans would be if Heller squeaked by and seized the nomination.  Heck, just 25 percent of the primary vote might be enough, as it was for Democrat Robert Goodman in the crowded Democrat gubernatorial primary in 2014.

But Heller’s already proved he can’t win again statewide.  Trump supporters will simply never forgive nor forget his “Never Trump” betrayal in 2016.  They will, like me, vote for a third-party candidate or NOTA before voting to put “Senator Spineless” in the governor’s mansion.

All of which is to say the hotly-contested GOP gubernatorial primary is not only a reality, but a necessity.  Because, as I teach in my campaign training seminars, it’s not necessarily the best candidate who wins, but the best campaign.

BOOT CAMP: How to Write a Winning Campaign Plan

Like most teens fresh out of high school, I “knew it all” when I got my first real job.  Seemed like every day I was telling my boss how things should be done.

Exasperated, he one day said: “Write it up.  Because if you can’t put your ideas down on paper, you haven’t thought them all the way through.”

A lesson I’ve never forgotten…especially because it’s so true.

Which brings me to campaign plans.  Few candidates have a written one, let alone a good one.  In fact, few have ever even SEEN one.

That ends this Wednesday night, when the topic of my weekly campaign “boot camp” workshop will be on “How to Write a Winning Campaign Plan.”

And everyone who attends will receive a “template” campaign plan you can use to guide the drafting of your own.

To RSVP and reserve your seat for this FREE workshop, click here

To see the topics of upcoming boot camps, click here

“All the ‘elitist’ rich people in Reno are jumping on the (Adam) Laxalt (for U.S. Senate) train, like it will take them somewhere special!  We rode this train before.  Reminds me of the little train that could…the one in Virginia City that’s COOL to ride but takes you nowhere.  We didn’t vote Laxalt in as governor. Why do all those in the establishment country club want to back this guy for Senator???” – Name withheld

“What Chinese products can you do without?  I’ll go first: Joe Biden.” – Author unknown