Wisconsin Governor Walker To Be Honored For “Courage Under Fire” 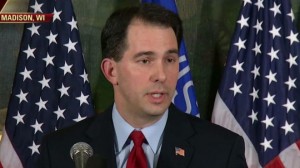 (Las Vegas, Nevada) – The 2012 Conservative Leadership Conference announced today that Wisconsin Gov. Scott Walker has been selected as this year’s recipient of the event’s “Courage Under Fire Award.”

“When Gov. Walker took office in January 2011, the State ofWisconsin, like many other states, faced a severe state budget deficit,” saidChuck Muth, president of Citizen Outreach and co-host of the conference.

“But unlike other governors who raised taxes to close the gap, Gov. Walker proposed serious spending reforms, including much-needed changes to collective bargaining for government workers. In the end, the governor’s reforms were approved, saving taxpayers over $1 billion annually while dropping the state’s unemployment rate to its lowest level since 2008.”

Nevertheless, unions and other liberal special interest groups successfully gathered enough signatures earlier this year to force a recall election, which will be held on June 5. But Gov. Walker has refused to back off or back down. Here’s what the Governor wrote in an email today:

“For more than a generation in Wisconsin, the power of special interests and the liberal elite have gone largely unchecked. My Administration finally stood up to them, and we changed the way we do things in government in Wisconsin.

“That’s why my opponents are so desperate to defeat me in this Recall. They want to roll back the clock and take us back to the days of skyrocketing taxes, bloated budgets, and unchecked and unaccountable spending. We cannot let that happen.

“I kept my promises to the voters here in Wisconsin. I didn’t raise taxes.

“This Recall is not just about Wisconsin, it is about the cause of reform across this country. It is about deciding what kind of country we are going to be for generations to come. We must send a message that we can and will live within our means. We must not hand power back to a small group of special interests and let them run state governments into the ground across this great nation.”

“Win or lose on June 5, Gov. Walker has been a shining example of what principled conservative leadership looks like and what you can accomplish when you’re not afraid to take a bold stand and keep your campaign promises,” concluded Muth.

“Gov. Walker did the right things for the people ofWisconsinregardless of special interest pressure and possible political consequences. As such the Conservative Leadership Conference is proud to recognize the Governor by honoring him as this year’s recipient of our Courage Under Fire Award.”