Would the Gipper Endorse the Donald?

Would the Gipper Endorse the Donald?
N&V Staff 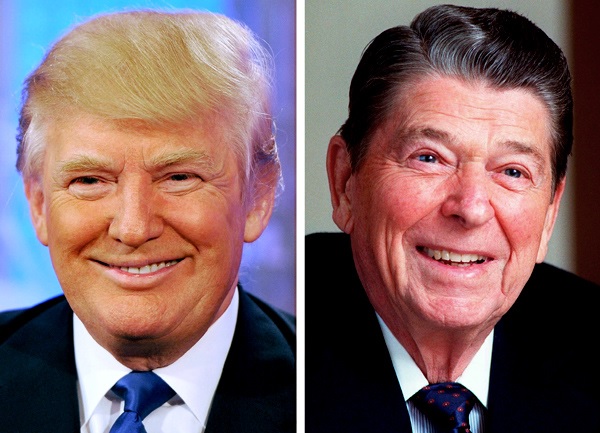 (Roger Stone) – Would Ronald Reagan endorse presumptive Republican Presidential nominee Donald Trump? Former Congressman Mickey Edwards, an early Reagan supporter, thinks not. I think, on the basis of all available information, that Mickey Edwards, good fellow that he is – is wrong. President Reagan would have endorsed Presidential Candidate Trump. Here’s why.

Reagan, in whose 1976, 1980 and 1984 campaigns I worked, like most party conservatives often sucked it up and supported Republicans he didn’t see eye-to-eye with. Ironically conservatives begrudgingly supported elitist establishment candidates like McCain and Romney in sharp contrast to establishment Republicans like Nelson Rockefeller, William Scranton and yes, Mitt Romney’s father Michigan Governor George Romney had no problem bailing out on Barry Goldwater in 1964. In the case of Mitt’s stunning betrayal of Trump who endorsed and recorded multiple robo-calls for Romney it is clear that the apple doesn’t fall far from the tree.

Mitt, you see, really wanted to run in 2016 but he made the shrewd political calculation that the Jeb Bush juggernaut could not be stopped. Trump, the brash New York Billionaire and self-styled spokesman for the “silent majority” made short work of Jeb despite the letters gathering of hundreds of millions of dollars and perception as the un-anointed frontrunner.

But back to Reagan.

The latest from the #NeverTrump crowd is the suggestion that no, Ronald Reagan would never have done such a thing. Former Congressman Mickey Edwards – a solid conservative, out of office and politics for a quarter-century, contends:

“I met with [Reagan] in the Oval Office every week of his Presidency . . . I know Ronald Reagan would never have endorsed Donald Trump for the presidency. Not ever. No matter what.”

Mickey Edwards won his Congressional seat in 1976, he served throughout the Reagan years – and all the evidence from those years suggests Reagan would have endorsed Trump, because that’s what he ALWAYS did . . . endorse the Republican nominee, against liberal Democrats.

Moreover, Reagan would have endorsed Trump because he agreed with far more Trump opinions and proposals than many of the moderates and liberals he DID endorse, during his 30 years as an active Republican. Reagan was a conservative but he had a pragmatic streak and understood the importance of party unity and inability to reach out to moderates to win enough votes to defeat truly liberal Democrats.

That’s right – Ronald Reagan even endorsed liberal Republicans. He campaigned for them too. He endorsed people who voted against him more than any other Republican (and more than many conservative Democrats of the era). And – get this – Reagan declined to endorse conservatives who challenged liberal Republican incumbents in primaries while maintaining warm relations with the challengers.

Let’s look at the real Reagan record. The last Democrat Reagan supported for President was Harry Truman. Though still a Democrat, Reagan endorsed Eisenhower for President. Reagan, a fading Hollywood figure who had not yet set the world ablaze with his 1964 televised stump speech for Reagan approached Vice President Nixon in 1959 (Reagan had endorsed Nixon as a “Democrat” in 1950 and they enjoyed a lively correspondence and a good relationship). The Gipper told him he was willing to become a Republican and campaign again for Nixon. Nixon told him his endorsement would be more valuable coming from a “Democrat” and told Reagan to switch to the Republican party in 1961 whether Nixon became President or not. Reagan agreed to delay his departure from the party of his boyhood idol FDR.

Before winning a stunning victory to become Governor of the Golden State, his first step to the White House, Reagan had to defeat former San Francisco Mayor George Christopher in the Republican primary. Reagan maintained a cordial relationship with his opponent and the morning after Reagan’s primary victory Reagan personally called every Christopher County Chairman to ask them to Co-Chair the county Reagan-Finch (moderate Republican Bob Finch had been a top aide to Richard Nixon and would win a narrow primary victory for Leiutenant Governor in a multi-candidate race divided by several conservatives (Finch would actually win the election polling 180,000 votes more then Reagan himself). Reagan understood that politics was about addition, not subtraction,

But look who Reagan did support –

Those are examples of people who did things and supported causes Donald Trump would never dream of doing – but Reagan endorsed them.

What about people Reagan didn’t endorse – but might have, if he’d really done as Mickey Edwards suggests and restricted his support just to strict conservatives:

Ronald Reagan, even in his weakened state, worked to defeat Bill and Hillary Clinton in 1992.

Reagan would have agreed with the Trump positions on taxes, government, military strength and a non-interventionist foreign policy based on having a strong military arsenal as a deterrent to America’s enemies around the globe. And when the Republican platform is written and approved at the Cleveland Convention next month, it will be, by a large, a Reaganite platform.

But, far more important than his opposition to the liberal Democrats or party regularity, Reagan was our last nationalist President elected before the Presidency fell to the globalists in the form of George H.W. Bush.

Would Ronald Reagan endorse Donald Trump? Absolutely. He would demand the defeat of Hillary Clinton and rejection of Obama Big Government and Liberal Incompetence.

Trump, like Reagan, is a nationalist. Trump, like Reagan, puts America’s interest first. The only greater proponent of the Eisenhower concept of “peace through strength” (a strong military as a deterrent to world troublemakers) than Donald Trump was Ronald Reagan. Both Reagan and Trump support American sovereignty. The Gipper would have backed The Donald.