Amazon’s No-Profit Model: Bleed Competitors To Death – Then Do Exactly What They Did

Amazon’s No-Profit Model: Bleed Competitors To Death – Then Do Exactly What They Did
NN&V Staff 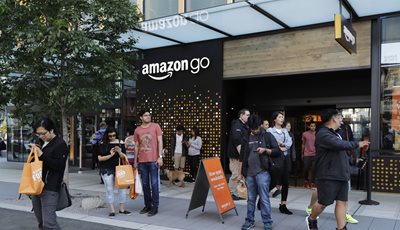 Amazon’s dominance of more and more sectors of our economy – is great and growing.  And they do it – the way the violent, radical Leftist Black Panthers attempted to accomplish their ends: “By any means necessary.”

Amazon has behaved this way – from their very beginning.  Some of the moves seemed at the time unorthodox – but in retrospect seem cold, calculating – and deadly for everyone…but them.

A key component of Amazon’s murderous business model – was operating for a quarter century making…almost no money whatsoever.  And for many quarters at a time – actually losing coin.  This from 2013:

“The company’s net profit margin has broken one billion dollars only once in the past nine years, in 2009. After reporting a loss last year, the world’s largest online store is expected to end this year with $349 million in net profit on nearly $75 billion in revenue. That’s close to the profit it made in 2005 ($359 million) on just a fraction of the revenue ($8.5 billion)….

“The net result of nearly two decades in business is that Amazon’s trailing 12-month price-to-earnings ratio stands at an alarmingly high 550. Compare that to consistent profit earners with significant online retail operations such as Google (p/e 29), Wal-Mart Stores (2) or eBay (25)….”

Those tiny profits – off of those massive revenues.  How is this possible?

Because Amazon’s objective wasn’t money – it was growth:

“The company barely ekes out a profit, spends a fortune on expansion and free shipping and is famously opaque about its business operations….”

And Amazons no-profit forced growth – comes at the expense of everyone besides Amazon selling…anything Amazon sells.

Black Friday in brick-and-mortar retail circles – is the day after Thanksgiving, and marks the start of the Christmas shopping season.  It is called Black Friday because most retailers operate in the red (i.e. at a loss) – all year until then.  It is that day they break through into the black.  So obviously, Christmas for them is life-saving crucial.

Amazon knows this.  So what do they do?:

“Amazon is cutting prices ferociously on its products as Christmas shopping picks up, to levels that are break-even or below.”

They cut prices to sell at a loss – right in the heart of retailers’ most important time of the year.

Lather-rinse-repeat for a quarter century – and Amazon gets to a nearly $900 billion market cap.  They are the biggest of behemoths – crowding out more and more and more competitors.

I have never been a fan of antitrust laws.  But come on with this massively anti-competitive Amazon nonsense.  This should have been addressed at least a decade ago.  Now we have a titanic unwieldy monster on our hands.

Obviously and of course – the Internet was going to negatively impact brick-and-mortar stores.  But the death of in-person retail is highly exaggerated – and has been artificially accelerated by Amazon’s obnoxiousness.

Amazon was originally known – for selling books.  That is what put them on the retail map.  And their business-as-usual anti-competitive business practices – did egregious damage to brick-and-mortar book stores.  This from 2012:

Amazon is Killing the Book Business

Well, for everyone – except Amazon.  And what better evidence do you need that brick-and-mortar bookstores…ain’t exactly dead?

Amazon Killed the Bookstore. So It’s Opening a Bookstore

Amazon to Open Hundreds Of Bookstores

Amazon screws all the bookstores, kills them – and then starts doing exactly what they did.

And they ain’t just doing it to bookstores.

And speaking of iconic stores – behold Toys ‘R’ Us.

“In 2000 – when the Internet and Amazon were in their relative infancy – titan Toys ‘R’ Us cut with Amazon a deal to be the online retail platform’s sole toy seller.

“As drafted, the deal was a win-win.

“Toys ‘R’ Us didn’t have to reinvent the wheel – and learn the art and science of online retailing.  Amazon had that covered.

“And Amazon got to offer a huge brand name company – and all the product they would not have to themselves sell.

“But then…Amazon started violating the exclusive deal – by offering toys from other retailers.

And here comes Amazon’s real killer of Toys ‘R’ Us:

“‘Toys ‘R’ Us Inc. has won a lawsuit against Amazon.com Inc. that will allow the toy seller to set up its own Web site and end an agreement to sell products on Amazon’s site.’

“Wait a second – did you get that?  Toys ‘R’ Us’ Amazon deal was so exclusive – Toys ‘R’ Us was precluded from building their own website.

Amazon knew exactly what they were doing – even way back then.  They were setting up Toys ‘R’ Us for the kill.  With some personalized additional touches – added to the way they were looking to kill all brick-and-mortar toy stores.

But even so the death of in-person bookstores is highly exaggerated – despite being artificially accelerated by Amazon’s obnoxiousness.  And what better evidence do you need that brick-and-mortar bookstores…ain’t exactly dead?

Amazon having blown open that hole themselves – with their anti-competitive-practice bazooka.  Nevertheless:

Amazon Takes a Page From Toys ‘R’ Us With a Holiday Catalog:

“Amazon is looking more and more like a traditional retailer.

“In a drive to win the business up for grabs after the demise of Toys ‘R’ Us Inc., the online giant is going conventional with plans to publish a holiday toy catalog, according to people with knowledge of the strategy. The printed guide will be mailed to millions of U.S. households and handed out at Whole Foods Market locations, the grocery chain Amazon bought last year….

“The move is part of Amazon’s push to incorporate traditional retailers’ tools into its business model. It even looked at acquiring some Toys ‘R’ Us locations earlier this year, according to people familiar at the time.”

And now that they have finally brought down the beast – they are immediately looking to do…exactly what the beast did.  Exactly where and how the beast did it.

Right down to the brick-and-mortar locations – and the holiday catalog.

Replicating exactly the traditional retail – they’ve been working for a quarter century to kill.

All of which – is more than a little obnoxious.

Seton Motley is the founder and president of Less Government.  Please feel free to follow him on Twitter (@SetonMotley) and Facebook.  It’s his kind of stalking.  This column was originally published by RedState on July 12, 2018

NN&V StaffJanuary 14, 2020
Read More
Scroll for more
Tap
Trump Can’t Do Anything Right in View of Leftist Media…Except Continue to Win
All of Putin’s Men Could Not Have Invented Hillary’s Toxic Mouth
Skip to toolbar