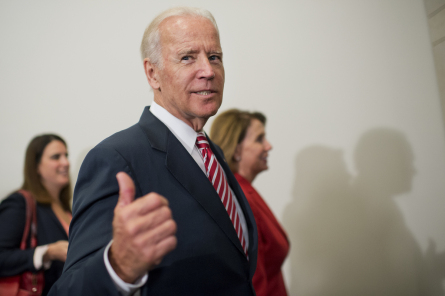 Biden has plenty of credentials and credibility but being vice president for eight years has its downside. (Photo by Tom Williams, CQ Roll Call)

That is understandable. Former Secretary of State Hillary Rodham Clinton, the Democratic front-runner, has not exactly performed like a winner, and growing questions about her character, forthrightness and judgment have produced plenty of negative coverage in the media, which feeds on controversy.

Vermont Sen. Bernard Sanders may be an adequate stand-in until someone credible enters the Democratic contest, but as I argued in late April, he isn’t formidable enough to deny the Democratic nomination to Clinton, who will never excite progressives. And former Maryland Gov. Martin O’Malley so far has been a bust, unable to get past, around or through the true-believing Sanders.

Biden, who served six terms in the Senate (and was elected to a seventh in 2008), would be a plausible alternative to Clinton. At least there is a case that he could threaten, or even overtake, her.

If you still think of Biden as a joke’s punchline, you aren’t remembering the whole story. A former chairman of the Senate Foreign Relations and Judiciary committees, Biden has plenty of credentials and credibility. While he can put his foot in his mouth at times, he is an energetic and enthusiastic campaigner with an engaging personality.