There’s a creepy, lawyer/televangelist in Reno, Jason Guinasso, who’s on a moral crusade to shut down all of Nevada’s legal brothels.  He’s not only pressuring the Nevada Legislature to do so, but has filed a federal lawsuit asking Washington, DC to do it for him. 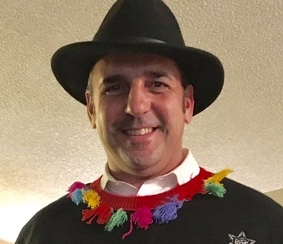 But there’s something even more sinister about what Guinasso is up to.

And for two years now Guinasso has been badgering, pestering, threatening and berating Lyon County officials in an effort to force the local sheriff to give him copies of all the brothel work card applications for the past ten years.

And those applications contain a TON of highly personal information, including…

This information – which individuals are required to provide the government in order to work – should never be made public for any private citizen seeking employment in any private business.  At the very least it makes them far more vulnerable to identity theft.

But it’s even more dangerous than that.

While there aren’t a lot of mentally unstable, potentially violent stalkers out there showing up at the homes and businesses of liquor store clerks and blackjack dealers, the same can’t be said for the women who work in Nevada’s legal brothels.

“A client came up to my personal door last night asking for sexual favors.  MY HOUSE DOOR.  MY HOME.”

In a separate incident, former brothel worker and UNLV researcher Christina Parreira tweeted the following – again, just a week ago…

“(T)his is still one of the creepiest things that can happen to a sex worker.  A man came up (to her current non-brothel place of employment), asked for me and did not give his name when I introduced myself; said he knew me from every Twitter account I have.”

And if you don’t think this sort of thing is not only creepy but extremely dangerous, consider the following warning notice that was posted at one of Nevada’s legal brothels last month…

“This guy frequents (brothel name redacted).  He is stalking one of the girls, waiting outside her home, chasing her thru the streets of Reno.  Has beat her up, knocked her teeth out, put sugar in her gas tank, calls her 100’s of x’s per day.  He needs to not to be allowed in, he’s dangerous.” 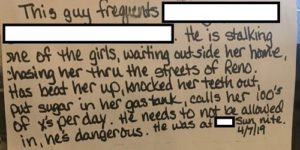 So there is a clear and present danger to these women should their personal information be made public through a public records request.

And whether you agree with legal brothels or not, I think we can all agree the women who work there shouldn’t have their teeth knocked out, right?

Oh, and just for the record, note that this attack happened OUTSIDE the brothel.  Inside the brothel the women are protected.  It’s on the street where the true danger lurks.

Unfortunately, work card applications are not currently included. But a short 9-word “Brothel Work Card Confidentiality” amendment to the statute would fix the problem.

Simply change the language to state that records containing such personal information are considered confidential if the person is providing the information to a local government entity for the purpose of “Applying to work at a duly licensed legal brothel.”

Or similar words to that effect.

That would exempt brothel work card applications from Nevada’s public records law and shut Guinasso down in his tracks.

Unfortunately, it’s too late in this legislative session to introduce a new bill to amend NRS 239.  However…

It’s NOT too late to amend an existing bill to accomplish the same end.  The only criteria is that the amendment be “germane” – meaning it’s relevant to the subject matter of the bill under consideration.

Which brings us to SB388 – a bill sponsored by Sen. Mo Denis (D-Las Vegas) which was heard by the Senate Finance Committee on Monday.

The big question is this: Is the issue of making work card applications confidential “germane” to the bill?  Well, the bill’s title reads…

I don’t know how it could be any more germane, especially since the Legislature has Humpty Dumpty-like powers to make “germane” mean whatever they want it to mean.

“Except as otherwise provided in subsection 3, a record or portion of a record that contains personally identifiable information collected by automated means over the Internet or other digital network by a governmental entity as part of the electronic collection of information from the general public is confidential if the governmental entity determines that the disclosure of the personally identifiable information could potentially create negative consequences, including, without limitation, financial loss, stigmatization, harm to reputation, anxiety, embarrassment, fear or other physical or emotional harm, for the person to whom the information pertains.”

Now, the public disclosure of brothel word card applications absolutely could potentially create negative consequences such as stigmatization, anxiety, embarrassment, fear, or other physical or emotional harm for the women who seek to obtain such employment.

Seriously.  It just doesn’t get any more “germane” than that.

But here’s the problem…

Work card applications aren’t completed and submitted “by automated means” online over the Internet.  You still have to fill them out by hand and submit an old-fashioned paper-and-ink form.

But a simple tweaking of the text specifically declaring work card applications to be confidential regardless of how they are submitted would do the trick.

And the one person in Carson City with the ability to make this happen is Senate Majority Leader Nicole Cannizzaro (D-Las Vegas).

Sen. Cannizzaro is a Deputy District Attorney for Clark County, so she’s more than familiar with the very real dangers sex workers face.

And as the Senate Majority Leader she has near-godlike power to declare a brothel work card confidentiality amendment – which really should include gaming and liquor work applications, as well – to be “germane” to SB388 and throw her full support behind it.

Without Sen. Cannizzaro’s support right now – before the bill’s final version is voted on and the 2019 session ends – the women who work in Nevada’s legal brothels risk having their personal information disclosed through a public records request from people like Guinasso and the guy who knocked one worker’s teeth out last month.

So if you want to see a “Brothel Work Card Confidentiality Amendment” added to SB388 (or any other “germane” bill that’s still out there), you need to contact Sen. Cannizzaro and let her know not only how important this is, but explain why the problem should be fixed now and not wait for two years until the next legislative session.

To ask for Sen. Cannizzaro’s help on this issue, you can contact her office by calling (775) 684-1475 or email her at Nicole.Cannizzaro@sen.state.nv.us.

But don’t wait.  Call or write TODAY.  There’s only a week to go before the end of session.  So speak now or forever hold your peace.

The Center SquareMay 11, 2022
Read More
Scroll for more
Tap
Why the Brothel-Banners Hide in Plain Sight
WaPo Article All About Identity Politics, Not Equality for Women