Why the Brothel-Banners Hide in Plain Sight

Why the Brothel-Banners Hide in Plain Sight
N&V Staff

A pair of anti-brothel crusaders, Melissa Holland and Laila Mickelwait, inked a column on Friday that once again demonstrates exactly why they hide behind blog posts, social media and videos… 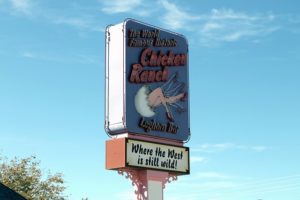 Like vampires, the light of day kills their arguments.

Indeed, when brothel-banner Julie Bindel went head-to-head against UNLV brothel researcher Christina Parreira in a BBC-hosted debate last month, Parreira cleaned Bindel’s clock. Shot down every one of her arguments like Tom Cruise shooting down those Russian MiG’s over the Indian Ocean in “Top Gun.”

It’s also why, during last fall’s campaign in Lyon County, Nevada to ban legal brothels there, the ballot question sponsors refused to debate the issue in a series of townhall meetings with Alice Little and Ruby Rae, a pair of legal courtesans at the Moonlite Bunny Ranch.

They KNEW Alice and Ruby would rip their arguments to shreds if they were actually forced to back up their misrepresentations and propaganda.

Which is why Holland, Mickelwait and others hide behind blog posts and videos.  Their arguments and claims simply can’t survive scrutiny and cross-examination.

“Forty-eight years ago prostitution was legalized in Nevada and as a result, Nevada has developed into a breeding ground for sex trafficking and commercial sexual exploitation.  In fact, Nevada has the highest rate of prostitution in the country – its illegal sex trade is 63% higher than the next highest state.”

First off, prostitution wasn’t legalized in Nevada.  What actually happened is that Nevada allowed rural counties to legalize, license and regulate brothels if they so chose.  Brothels were NOT legalized in Clark and Washoe counties – where Las Vegas and Reno are located.

As such, it’s a darn-near criminal misrepresentation to claim that “Nevada” is a “breeding ground” for sex trafficking when those highly-questionable statistics are actually based on Las Vegas and Reno where legal brothels are banned.

Buy, hey, why let facts get in the way of a false argument designed to create mass hysteria, right?

Oh, puh-lease.  The nearest legal brothel to the Las Vegas Strip is almost 90 minutes away.  Which means most clients and providers of consensual adult sexual interaction opt for the risk of engaging illegally in their Las Vegas hotel room rather than spend three hours driving back-and-forth in a car.

The notion that a legal brothel located an hour-and-a-half away “increases the demand” for sex-for-fee services is laughable on its face.

Of course, no hysteria-inducing propaganda campaign is complete without invoking “the children.”

“In Nevada alone,” Holland and Mickelwait blubber, “there is a demand for over 20,000 innocent women and children sold online every year.”

“In order to abolish sex trafficking, we must eliminate the demand for prostitution,” the Disinformation Duo continues.  “The demand elimination strategy is the only way to put pimps and traffickers out of business.”

Secondly, the “demand elimination strategy” has never worked and never will.  Let history be your guide.  Remember “prohibition” on alcohol and gaming?  And how’s that “war on drugs” thing worked out?

You’re barking up the wrong tree, ladies.  As failed social experiments go, your “demand elimination strategy” is right there at the top of the list.

They did get one thing correct, though, when they argued that “women in prostitution shouldn’t be arrested.”  Which, ahem, is exactly the case when it comes to Nevada’s legal brothels – which they’re trying to shut down!

But then they go on to argue that, instead, the clients “should be arrested and their crimes should be felony-level offenses.”

Um, why should a consensual act between two adults be illegal for one party but not the other?  Makes absolutely no sense whatsoever.

This ridiculous proposal is what’s called the “Nordic model” – a thoroughly discredited idea that supporters trot out as some kind of silver bullet that’ll cleanse society and usher in a new Era of Moral Nirvana.

It’s a future best viewed through rose-colored glasses while riding a unicorn.

“Legal prostitution in Nevada has brought severe harm to the women and girls who’ve been pulled into prostitution over the last 48 years,” Holland and Mickelwait conclude.  “It’s time to end the toxic prostitution industry in Nevada. It has to stop. Now.”

Because (heads up Las Vegas Convention & Visitors Authority): “Nevada is not safe for women.”

That opinion isn’t shared by the grown, adult, consenting women who actually work in Nevada’s legal brothels.  Here’s just a small sampling of their take on the subject…

“If a consenting adult wants to engage in sex work, that is their right, and it should not be a crime. All people should have autonomy over their bodies and their labor.”

I thought we were supposed to trust women?  “My body, my choice,” right?  So, um, who’s gonna save these women from the “saviors”?

The Center SquareSeptember 21, 2022
Read More
Scroll for more
Tap
We In Middle America Are Invisible
9 Words to Help Protect Women from Getting Their Teeth Knocked Out – or Worse