We In Middle America Are Invisible

We In Middle America Are Invisible
Penny Press

To the Media And the Rest Of the Political Establishment, We In Middle America Are Invisible

If you ever want to see what a bunch of worthless pukes who inhabit the lamestream media produce, put the “news” app on your iPad and read it every morning. 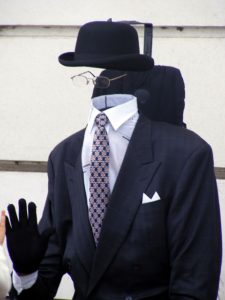 It is SUPPOSED to be a compendium of reporting.

It IS a compendium of anti-Trump horsecrap.

Fox News and the Wall Street Journal are the token sort-of-conservative news providers.  The rest are mostly designed to bring to mind the words “enemies of the people”.

The reason I read this crap is that one should always read what the other side is saying.  Even if it makes your head want to explode.

Washington is full of people—many in the media—who no matter where they come from lose their affinity with the average American—you and me—as soon as they arrive.

Back in the days we owned KTRT in Tulsa, we had a regular caller named Jack Jackson.  He used to tell our on-air hosts that once someone got elected to the School Board, the County Commission or the City Council, they arrived at the Courthouse, City Hall or the School headquarters, saw the receptionist with the 10 button phone, took a breath of that pink gas and they were never the same.

And it applies even more to wannabes like “journalists” and staffers.  Those folks are even more dangerous because we can get rid of bad elected public officials at an election.  People who spread fake news and the faceless staffers who work in government seem to have lifetime appointments.

The cure for this is not more government regulation.

I’m a big believer in the First Amendment.

The cure for this is eternal vigilance.  We need to vote with our channel changer and our subscription dollars.  We need to question everything.

As an example, the other day Fox News Channel did a poll that they said showed that Joe Biden had widened his “lead” over the Democrat 2020 field. And that he would beat the President in a general election.

Here is what they didn’t tell you on TV.  In fact, you have to do a pretty thorough web search of their site to get:

“Interviews were conducted May 11-14, 2019 among a random national sample of 1,008registered voters (RV). Landline (231) and cellphone (777) telephone numbers were randomly selected for inclusion in the survey using a probability proportionate to size method, which means phone numbers for each state are proportional to the number of voters in each state.”

In other words, this is the same crap that said Hillary was going to win by seven points the day of the 2016 election.  And, worse, it’s from FOX!

Did they exit poll 10,000 people leaving a big event?  No.  They look you in the eye and talk about this stuff like it is true.  They don’t even tell you the methodology on screen—just what they think is the “margin of error”.

Now one thing you need to know.  Even a stopped clock is right twice a day.  Occasionally, these guys get lucky.  But the science behind what they do has been rendered useless by the new digital landscape which makes it very difficult to find a real sample.

So thinking Americans—you and I—do our research at coffee shops, neighborhood gatherings, on Southwest Airlines and places where real people gather.

My best guess, from those sources, is that we are pretty happy with the President.  He should win handily in 2020.

That’s NOT an excuse for complacency.

N&V StaffJanuary 21, 2021
Read More
Scroll for more
Tap
Boomers’ Legacy to Their Children and Income Inequality
Why the Brothel-Banners Hide in Plain Sight