A Conservative Republican Case for Repealing and Replacing Dean Heller 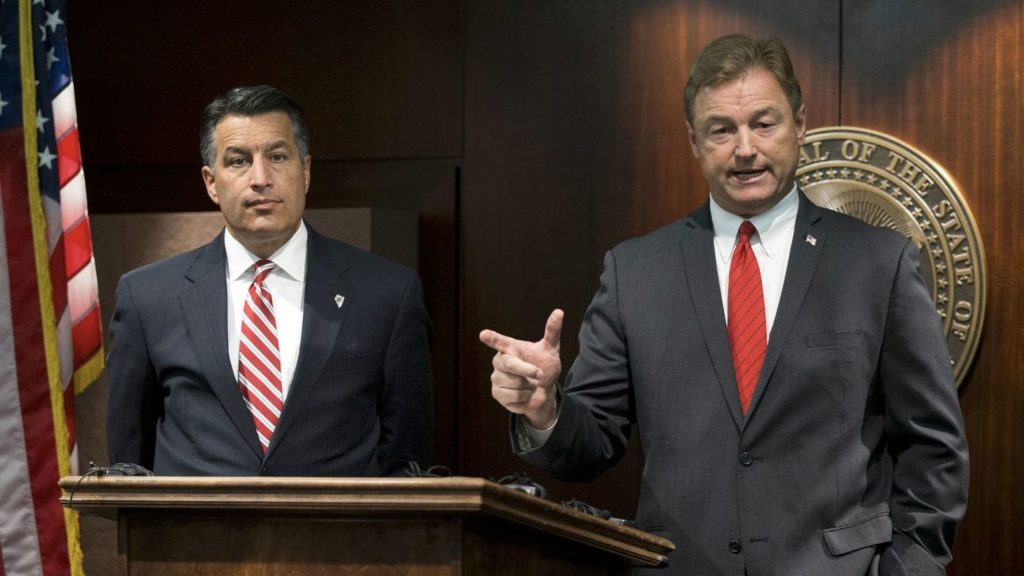 (Chuck Muth) – As a conservative Republican, if the election were held today I’d “pull a Heller” and not vote for Dean Heller for U.S. Senate. I’d vote for the IAP’s Kamau Bakari.

Lucky for Heller, he’s still got four months to change my mind. Not likely though. The only arguments for voting for “DC Dean” are that (a) “Wacky Jacky” Rosen would be worse and (b) Republicans could lose control of the U.S. Senate if she wins.

My counter-argument is that things will actually be worse for the conservative movement, the Make America Great Again agenda and the Nevada Republican Party in the long run if DC Dean gets another six years.

If Heller is cashiered, Nevada would be represented by the totally unaccomplished and unimpressive Wacky Jacky; a freshman senator with no power and no influence. Which means she ain’t gonna do much damage.

Look at it this way: If the great state of Nevada was able to survive 30 years under Senate Minority/Majority Leader Harry Reid, it’ll survive six years under Wacky Jacky.

As for the possibility of Republicans losing control of the Senate if Heller loses; ain’t gonna happen. Democrats have 24 seats on the line in November; Republicans only nine. If Republicans can’t hold onto their majority with a super-advantage like that they don’t deserve to be in the majority anyway.

The reality is Republicans are likely to pick up an additional three or four seats – maybe more if there’s a “Trump Wave.” So they can afford to lose Heller and still come out ahead.

Now the case against DC Dean…

Let’s start with the fact that his poor judgment in being a card-carrying “Never Trumper” in 2016 helped Hillary Clinton win Nevada and almost win the White House. If Heller had gotten his way, Crooked Hillary would have filled those two Supreme Court vacancies.

He should be rewarded for that?

And I’m not buying the President’s argument that while DC Dean was “a little shaky in the beginning,” he’s rock solid now.

The ONLY reason he hopped on the Trump train last summer was because he was being seriously challenged in a GOP primary. And the only reason he’s with the President now is to get re-elected in November.

And if he is, he’ll team up with fellow “Never Trumper” Mitt Romney – who will be the next U.S. senator from Utah in November – and go right back to undermining the President and being a McCain-like thorn in his side the very next day.

Then there was the ObamaCare repeal fiasco.

That little dog-and-pony show/press conference Heller did with Nevada Gov. Brian Sandoval, in which he announced he OPPOSED the House-passed repeal-and-replace bill, not only undermined the President and the Republican Party, but is the reason why we STILL have ObamaCare in place today.

He should be rewarded for that?

DC Dean is also a finger-in-the-wind populist, not a conservative. As such, this guy has flip-flopped on more issues than Carter has liver pills. And important issues, too. Like immigration, government spending and abortion. You never know where Heller stands because he stands everywhere.

Then there’s how he regularly and proudly undermines the conservative movement with his “No Labels” crap. In fact, he put out a press release just this past April bragging about how he was the “5th Most Bipartisan U.S. Senator.” As if voting for the liberal agenda is a good thing for Republicans.

Then there’s his freakish penchant for taking credit for everything under the sun. Remember how it wasn’t enough for him to simply vote for President Trump’s tax cut? No, he had to claim he actually WROTE the bill. Me, me, me, me, me, me, me.

Then there’s his silly, if not ridiculous, legislative PR stunts. Like his “No Budget, No Pay” proposal. And yet DC Dean has continued to take his pay even though there’s been no budget. So much for leading by example.

Or his toothless call for the Senate to work “24/7” to confirm judicial nominations. His colleagues have completely ignored this tom-foolery, showing just how little clout he has with them. Then again, Heller himself has ignored his own “24/7” call. What a hypocrite.

Scared of the press? Infamous for it.

Heck, he even hides from generally friendly conservative talk-show hosts. When was the last time he was on Alan Stock’s program? Has he ever done Wayne Allyn Root’s show? And when he does deign to do a radio show, rarely, if ever, does he take questions from listeners.

Oh, and remember when he spoke at the Republican Men’s Club in Vegas back in April and reporters were banned?

The club was put in the awkward position of covering for him by saying it was THEIR decision due to reporters interfering with the waiters. But the press had never been banned before Heller’s appearance – and has never been banned again since. Think that’s just a coincidence?

How about the Nevada Republican Party? Has he helped it raise money? Has he supported its programs? Has he shown up at meetings and events – other than Lincoln Day Dinners? I’m not talking about the past six months while he’s been running for re-election. I’m talking about the last six years.

Sorry, the guy’s been AWOL. And he’ll disappear again for another six years if re-elected.

Sooner or later you have to put your foot down, say enough is enough and teach these people a lesson that’ll carry over as a warning to future candidates. It’s about playing the game for nine innings, not just the first inning.

In the end, however, it probably won’t matter.

Even if conservative, Trump-supporting Republicans like me change our minds, suck it up, bite the bullet and vote for Heller in November, he’s toast anyway. Just look at the voter registration numbers and the vote history from his last election.

In 2012, Dean-o beat a Democrat opponent – who was running under an ethics cloud like poor Pig-Pen in the Charlie Brown comics – by a mere 11,000 votes out of almost a million cast. Also in that election there were almost 100,000 votes cast for “None of the Above” or for one of the third-party candidates on the ballot.

Does anyone in their right mind think Heller’s performance in office over the last six years means he’s gonna IMPROVE on those numbers?

Folks, you better start getting used to the almost inevitable reality of “Senator” Jacky Rosen. And it’s not too early for Republicans to get somebody up in the bullpen to take her on in 2024.

Now, don’t even try to blame me and others like me for this loss. Blame Dean Heller. He brought this on himself. If it was OK for him to be a Never Trumper, it’s OK for us to be Never Hellers.

Sauce for his cooked goose.

(Mr. Muth is president of CitizenOutreach.org and publisher of NevadaNewsandViews.com. He blogs at MuthsTruths.com. His opinions are his own.)