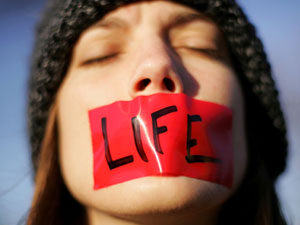 It is vital that Donald Trump receive every pro-lifer’s support and be elected President of the United States.  The reasons are clear.  The unborn and their cause are in grave danger.

First and foremost, the Supreme Court is at risk.  The next president of the United States will replace Justice Scalia and likely as many as three more.  The balance on the court is now 5-3 to keep abortion legal and sometimes 4-4 on provisions like partial birth abortion.

What will happen with Hillary nominating justices?  Those justices, when they get the chance, will strike down the abortion limiting laws and protections we’ve put in place in the last 43 years.  If given the chance they will either strengthen or overturn Roe and put abortion on a more solid footing that would strike our limitations and make chances of overturning abortion law nearly impossible.  Donald Trump has not only said that he is pro-life, but that he will appoint justices who will overturn Roe and send it back to the states. We can’t let Hillary pack the court.  It will be over in four years.

What about those limitations?  Those limitations that we are pursuing and achieved while we work to shape a Court that would overturn Roe are incredibly important.  Abortions are down by nearly 40 percent; the abortion rate is down almost 50 percent; the abortion ratio, the number of pregnancies ending in abortion is down some 40 percent.  These dramatic changes have come in great part as a result of these limitations.  They are also influencing the culture.  The Partial Birth Abortion ban and its dramatic discussion has led to an 8-10 point swing toward the pro-life position.

Hillary Clinton opposes the Hyde Amendment which prohibits federal taxpayer funding of abortion, except in rare instances and not in Obama care which has its own separate funding source.  Between Hyde and Roe, the taxpayer was paying for 300,000 abortions a year.  The Hyde Amendment has been passed for 40 straight years.  Millions of people are alive today because the taxpayer would not pay for abortion.  Donald Trump wants to pass the Hyde Amendment into law instead of it being a yearly amendment.  He wants to end Obama care and get rid of its subsidies and direct funding of abortion.

Trump will sign pro-life legislation passed in the Congress like the Pain Capable Unborn Child Protection Act, conscience rights legislation and a dismemberment abortion ban.  He will put a stop to Planned Parenthood’s evil aborted body parts trafficking activities.  If the Democrats win the Congress, he’ll veto abortion legislation.  If Hillary is president, she will move on the conscience rights of Catholic, Evangelical and other pro-life doctors and make sure that they are on call to do abortions after morning mass and bible study.  She’ll do the same things to hospitals and insurers.  In California, churches are being forced to include abortion in their insurance coverage despite federal conscience regulations.  The Obama administration is not enforcing them.

Presidents have an international impact on abortion.  A Trump administration will reinstate the Reagan Mexico City Policy withholding American taxpayer funds to groups who counsel, provide or promote abortion in other nations.  Trump will enforce Kemp Kasten under which George W Bush withheld funds to the UN Population Fund because of its support for China’s forced abortion “One (now two) Child Policy”.

Trump will enforce, not oppose, the Helms Amendment which prohibits foreign aid being used for abortion as a method of family planning or to motivate or coerce anyone to practice abortions.  Hillary Clinton will try to use international treaties to intimidate or force other nations to change their pro-life laws.

The stakes are high.  Hillary Clinton’s abortion position is well known.  In their last debate Donald Trump exposed her extremist abortion throughout pregnancy for any reason position.  She will be a disaster and set back the cause of the unborn back by another generation.

Some pro-lifers say Trump has been pro-choice until recently.  He can’t be trusted.  He’s only pro-life for political purposes….like Mitt Romney whom we supported and who flip flopped on many issues?  Recent nominees have tried to say as little as possible about abortion, but not Donald Trump.  It’s hard to think of a presidential nominee who has repeatedly pressed the pro-life issue as forcefully.  In the final debate, Trump promised again to support justices, not in the coded words of strict constructionism of past nominees, but in clear, forceful language that they would be pro-life and would overturn Roe.  Trump took Clinton’s radical abortion on demand throughout pregnancy position to the mat and excoriated her for her vote against the partial birth abortion ban.  When since Ronald Reagan have we had a nominee who has been willing to fight for our cause like that?

Trump once supported abortion, even partial birth abortion.  But our movement has many converts.  Trump doesn’t have to be great for us.  If he were only to take the foot off the gas of the Obama-Clinton-Harry Reid-Planned Parenthood and their body parts harvesting and trafficking juggernaut and merely hit the brakes, that alone would be a tremendous benefit to our cause.

The only chance pro-lifers have of stopping the Obama-Clinton-Planned Parenthood juggernaut is voting for Donald Trump and getting many others to do the same.  If we vote for Trump and he doesn’t pan out, we are no worse off than with Hillary.  But if Mr. Trump does any of these things noted, it will be a tremendous benefit to us.

This election has clearly grave consequences for the unborn and their cause.  We can’t abandon the unborn to Hillary.  It will be over in four years.  Pro-lifers need to vote for Donald Trump for President of the United States.