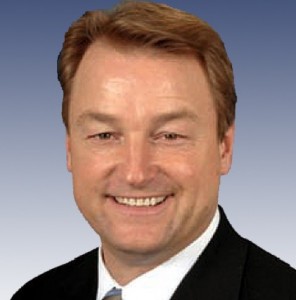 Yet, Heller complimented the race that Danny Tarkanian is running against his establishment pal Roberson in the heated and crowded GOP primary.

Tarkanian, a former star basketball player at UNLV, coached by legendary father Jerry Tarkanian, is seeking public office for the fifth time, losing either primary or general elections for state senate, secretary of state, the U.S. House, and U.S. Senate.

His fifth race may be his smartest, at least in the way he is spending his money, Heller said.

“Tarkanian is doing something right that he has not done in the past,” Heller said in an interview after the taping of Nevada Newsmakers Tuesday in Reno.

“He has always been able to raise a lot of money and he’s always spent it early,” Heller said. “And then two or three weeks out (from the election), he’d be bankrupt and have no money left.

“This (2016 campaign) is the first time — he’s had four losses — that he is actually — financially — doing it right, saving his money,” Heller said.

Heller said Tarkanian wisely seems to be “keeping his powder dry” (political cliche) for the final countdown to election day.

“His ‘burn rate’ is so low right now,” Heller said. “This is the first time that he is, financially, doing it right, saving his money.”

Tark’s financial strategy is not a good sign for Roberson or other candidates in the crowded GOP field. “It will be a tough race,” Heller concluded.

ROBERSON AND TARKANIAN are close in their fund-raising abilities, according to first-quarter campaign finance reports filed with the state. Tarkanian amassed $186,000 in the first three months of the year, including a $13,000 personal contribution. He’s got $555,000 cash on hand, according to the report. Roberson reported raising $176,000 and has $685,000 cash on hand.

I’VE WATCHED TARKANIAN’S political career for many years. I wonder sometimes, ‘Why does he keep running for office? Those involved in the political game can only imagine how much it would hurt to lose four campaigns in a row — after spending so much time, energy, and treasure during each campaign.

If anything, Tarkanian has perseverance. You gotta give him that.

He appears to live his political life by lessons learned from his dad, and perhaps his coaches at Bishop Gorman High.His political mantra seems to be, “If you get knocked down, you get back up!”

His political mantra seems to be, “If you get knocked down, you get back up!”

Coaches probably told him that over and over in his youth.

Politically, you can’t knock this guy out with a baseball bat.

I’ve often thought that Tarkanian really must love this “game” of politics. Maybe, it’s his competitive outlet as an adult.

GREATEST TARKANIAN MEMORY: I recall when Danny was the star senior quarterback at Gorman High in the late 1970s. The Reno High defense hit him so hard and so often in the AAA state championship football game that he had to leave the game, limping to the sideline. It appeared he was done for the night.

Then, with little time left on the clock and with Gorman down by one or two points, Tark returned to the game for Gorman’s final offensive drive.

Tark completed six or seven passes. The receivers’ feet were off the ground on each catch, I recall to this day as a senior citizen.

Tark got Gorman close enough to the end zone that a kid named Bobby Lozzi kicked a field goal to win it for Gorman.It was a story-book ending. It was the best high school football performance I saw during the time I worked as the RGJ’s prep sportswriter in my youth.

It was a story-book ending. It was the best high school football performance I saw during the time I worked as the RGJ’s prep sportswriter in my youth.

In politics, Tarkanian still can drive down the field. But keeps missing the winning field goal.

TARKANIAN is hitting Roberson hard in campaigning for leading the push to get a $1.4 billion education tax plan through the Legislature in a session when the GOP had the majority in both houses. Roberson was acting on behalf of Gov. Brian Sandoval, who was pushing the Commerce Tax as a major component of his plan. Many conservatives said the Commerce was eerily similar to the ‘margins tax’ that voters overwhelmingly rejected in the 2014 election.

Roberson has a tough sell, even with “Gov. Sunny” on his side. Defending tax increases is nearly impossible in GOP primaries because many of the primary voters’ political philosophy is “no new taxes.”

Roberson can counter with the logic that Nevada’s public education system ranks at the bottom of national rankings and needs a vast infusion of money to create and educate a viable workforce, especially when so many students view English as a second language.

If not, many of these new high-tech business like Tesla, Faraday, and Switch will be importing their workers from California.

To some in the Nevada GOP, that still sounds like liberal balderdash.

Ray Hagar is the political correspondent for Nevada Newsmakers.