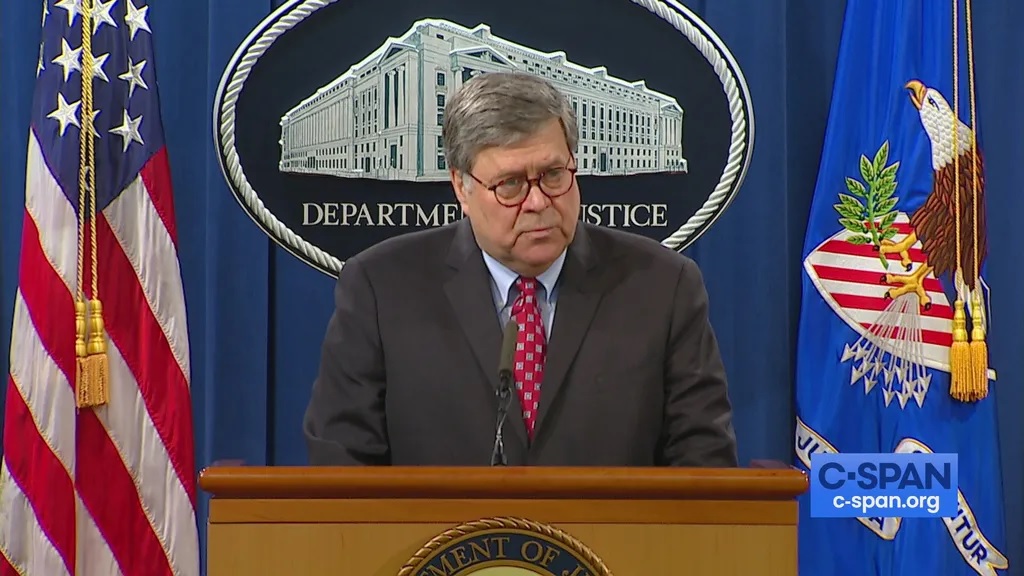 (U.S. Attorney General William P. Barr) – Over the Constitution Avenue entrance to this building is a Latin inscription that translates as “Everything is created by Law and Order.” That ancient principle still holds true.  Our free society depends on the rule of law — the assurance that ordinary citizens can go about their lives without being subject to arbitrary violence or fear.  When the rule of law breaks down, the promise of America does too.

Our nation is now confronting two serious threats to the rule of law.  The first is a long-standing one but was recently crystalized and driven home by the killing of George Floyd in Minneapolis.

The video of police conduct in this episode is harrowing.  When you watch it, and imagine that one of your own loved ones was being treated like that, and begging for their lives, it is impossible for any normal human being not to be struck in the heart with horror.

This matter is being pursued by both the state and the federal government.  The state has filed second degree murder charges against one officer, and aiding and abetting charges against three other officers.

As we typically do in cases such as this, the Department of Justice is conducting a parallel and independent investigation into possible violations of federal civil rights laws.

The president has directed me to spare no effort.  We are coordinating our work with that of Minnesota Attorney General Keith Ellison.  As a matter of comity, the Department of Justice typically lets the state go forward with its proceedings first.

This afternoon, our United States Attorney in Minnesota and FBI Special Agent in Charge of the Minneapolis Field Office will attend a memorial service for Mr. Floyd.  Today is a day for mourning, and the day is coming soon when justice will be served.

George Floyd’s death was not the first of its kind, and it exposes concerns that reach far beyond this case.

While the vast majority of police officers do their job bravely and righteously, it is undeniable that many African Americans lack confidence in the American criminal justice system.  That must change.  Our Constitution mandates equal protection of the laws, and nothing less is acceptable.  As the nation’s leading federal law-enforcement agency, the Department of Justice will do its part.  I believe that police chiefs and law enforcement leaders around the country are committed to ensuring that racism plays no part in law enforcement, and that everyone receives equal protection of the laws.

In October 2019, the President established the first Commission on Law Enforcement since the 1960’s.  I am meeting later this month with the Commission and have been talking with law enforcement leaders around the country.

In the weeks and months ahead, we will be working with community leaders to find constructive solutions so that Mr. Floyd’s death will not have been in vain.  We will work hard to help bring good out of bad.

Unfortunately, the aftermath of George Floyd’s death has produced a second challenge to the rule of law.

While many have peacefully expressed their anger and grief, others have hijacked protests to engage in lawlessness — violent rioting and arson, looting of businesses and public property, assaults on law enforcement officers and innocent people, and even the murder of a federal agent.

Such senseless acts of anarchy are not exercises of First Amendment rights; they are crimes designed to terrify fellow citizens and intimidate communities.

As I told the governors on Monday, we understand the distinction among three different sets of actors.  The large preponderance of those who are protesting are peaceful demonstrators who are exercising their First Amendment rights.

We have evidence that Antifa and other similar extremist groups, as well as actors of a variety of different political persuasions, have been involved in instigating and participating in the violent activity.  We are also seeing foreign actors playing all sides to exacerbate the violence.

The Department of Justice is working to restore order in the District of Columbia and around the nation.  Here in Washington, we are working around the clock with local police, the citizen soldiers of the National Guard, and other federal agencies to provide safety and justice.  We have deployed all the major law-enforcement components of the department in this mission, including the FBI, ATF, DEA, Bureau of Prisons, and U.S. Marshals Service.  I thank them and all those working bravely and professionally to protect the District.

The Justice Department is also working closely with our state and local partners to address violent riots around the country.  Our federal law enforcement efforts are focused on the violent instigators.

Through the FBI, U.S. Attorney’s Offices, component field offices, and state and local law enforcement, we are receiving real-time intelligence, and we have deployed resources to quell outbreaks of violence in several places.  I urge governors, mayors, and other state and local leaders to work closely with the National Guard and with us.  The federal government has thus far made 51 arrests for federal crimes in connection with violent rioting.  We will continue to investigate, make arrests, and prosecute where warranted.

When I was Attorney General in 1992, violent riots broke out in Los Angeles following the acquittal of the police officers accused of beating Rodney King.  Ultimately, the department at my direction filed federal civil rights charges against the officers.  As President Bush assured the Nation at that time, “The violence will end.  Justice will be served.  Hope will return.”  The same is true today.  The rule of law will prevail.  Thank you.