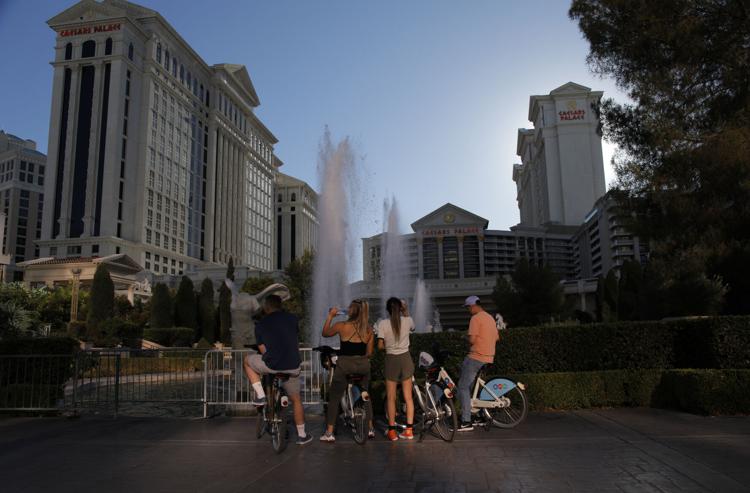 People stop to look at the fountains at Caesars Palace hotel and casino along the Las Vegas Strip devoid of the usual crowds during the coronavirus pandemic, Tuesday, May 26, 2020, in Las Vegas.
AP Photo/John Locher

(Michael McGrady) – After months of closures due to the COVID-19 pandemic, Nevada’s casinos are set to reopen on Thursday.

Gov. Steve Sisolak last month set June 4 as a target to allow guests and patrons to return to casinos.

Nevada, which has the largest share of its economy reliant on retail, leisure and hospitality among states, has been especially hard hit by the virus. The state has 34 percent real-time unemployment, according to 50economy.org.

MGM Resorts International is prepared, the company’s acting CEO Bill Hornbuckle says. Amid the nationwide protests condemning police brutality and the death of George Floyd in Minneapolis, Minn., the MGM-owned hotels see no reason to remain closed as many other industries reopen.

Hornbuckle said that he expects properties like the MGM Grand, the Bellagio, and New York-New York to reopen Thursday. Excalibur is expected to reopen on June 11, local media reported.

To accommodate reopening strategies, MGM released a comprehensive plan for its Las Vegas properties so that there could be fast, effective, and safe measures in place to resume casino and hotel operations.

The plan, Hornbuckle noted at the time, “outlines our comprehensive approach to welcoming guests back safely.”

Caesars Entertainment, which owns properties like Bally’s, Harrah’s Las Vegas, and Caesars Palace, are also expected to reopen on June 4 or in the coming days.

The company confirmed that some of their properties on the strip will begin adjusted gaming operation positions, starting Thursday, with Harrah’s reopening June 5 under the plan. Like MGM, Caesars got the greenlight to resume business operations in a staggered format.

Caesars Palace and the Flamingo will resume lodging and hotelier activities, including most gaming operations like table games and slots, according to a statement released last month.

To boost social distancing efforts, the company is also suspending all parking fees and valet services that may require human-to-human contact.