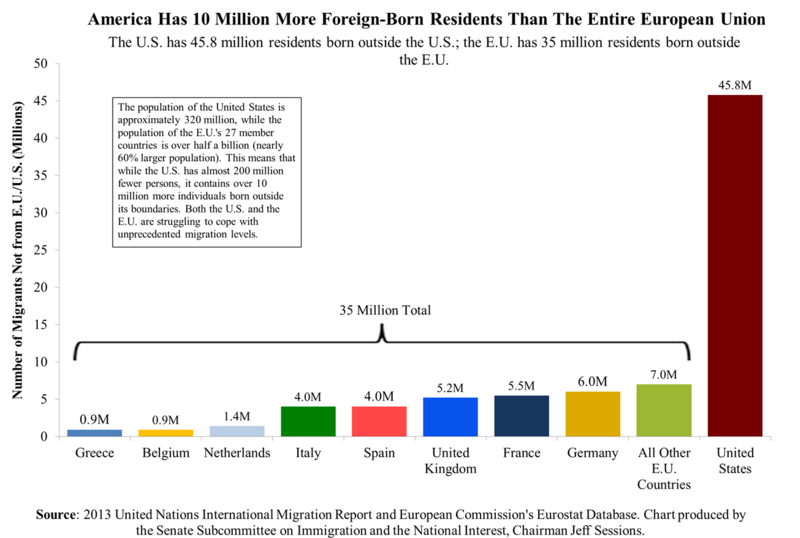 Both the United States and the E.U. – particularly the wealthiest nations in the E.U. – are struggling with the economic and societal effects of unmitigated immigration. Yet, even though the United States has taken in nearly 11 million more migrants born outside its boundaries than the E.U. has taken in from outside its own, American politicians are pushing to increase immigration rates while many E.U. nations are pushing to reduce them.

The most recent major immigration bill considered by the U.S. Congress – the Senate’s ‘Gang of Eight’ immigration bill – proposed to dramatically increase future immigration, including tripling the grants of new permanent residency offered within a single decade. Similarly, the industry-supported Immigration Innovation Act of 2015 (or I-squared) would substantially boost annual net migration into the United States. Given these events, and the American public’s preference – by a wide margin – for immigration reductions, it is worth comparing the relative size and composition of the foreign-born populations in both the U.S. and E.U. countries. In order to use uniform international data, the chart is produced from official United Nations and European Commission reports.

The ten most populous countries in the E.U. (Germany, UK, France, Spain, Italy, Netherlands, Belgium, Greece, Poland, and Romania) contain about 415 million of the E.U.’s 500-million plus residents. These ten E.U. countries are home to 28 million people born outside the E.U. – or nearly 20 million fewer people than the number of people in the U.S. born outside the U.S. (Even including intra-E.U. migration, these 10 countries still have nearly 3 million fewer migrants than the U.S. despite having a population nearly 100 million larger than the U.S.) As a share of the population, roughly 1 in 15 residents of these countries were born outside the E.U., compared to nearly 1 in 7 U.S. residents being born outside the U.S. To put that in context, in 1970 fewer than 1 in 21 U.S. residents were foreign-born. Assuming no law is passed to reduce annual immigration rates, the Census Bureau projects that the foreign-born population share in the United States will soon eclipse every prior record, and will continue rising to new all-time records every year to come – lowering wages for today’s workers, both immigrant and U.S.-born. This autopilot growth in the labor supply continues even as automation steadily reduces demand for workers.

As one further mathematical comparison: the total migrant population in all of Latin America is 7.75 million (many being regional migrants), meaning that the U.S. has admitted more people from outside its boundaries than 21 different Latin American countries put together and the E.U, combined.

U.S. Senator Jeff Sessions (R-AL) serves on four Senate committees: Armed Services, Budget, Environment and Public Works, and Judiciary, where he is Chairman of the Subcommittee on Immigration and the National Interest. Visit his website at Sessions.Senate.gov.

The original version of the article was published at Jeff Sessions’ website.