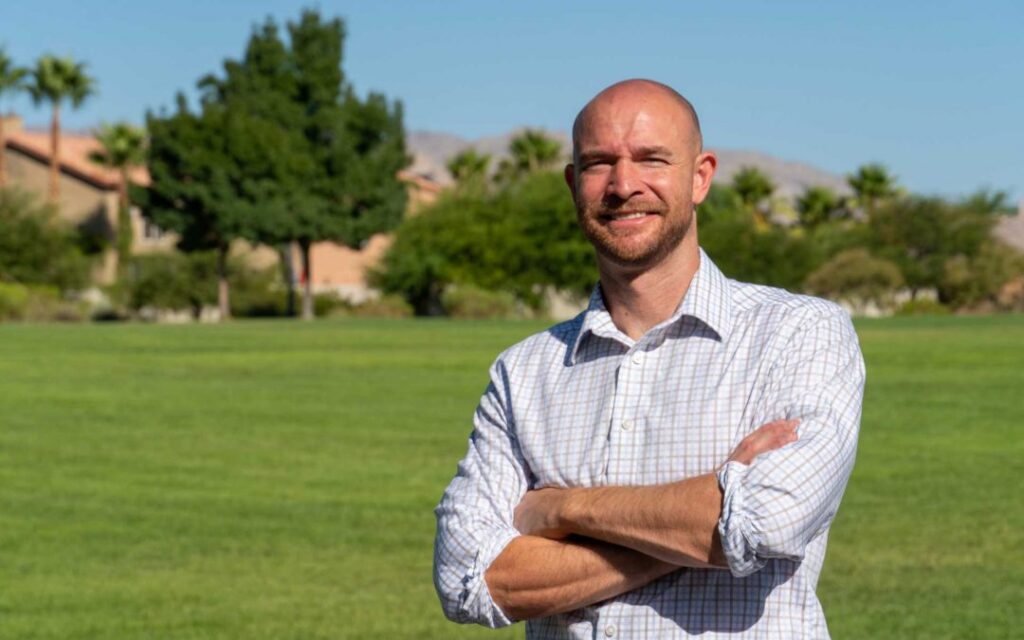 (Ron Knecht) – Andy Mathews of Las Vegas, the freshman star of the 2021 General Assembly, announced this week he’ll be running for Nevada State Controller in 2022.  What a blessing for Nevadans!
Perhaps the best way to describe his qualifications is this anecdote I heard.  The Democrat leadership told the Republican leadership at the start of the session when committee assignments were being made that Mathews would not be appointed to the Ways and Means Committee that hears the budget.
The reason?  He’s too knowledgeable about the facts and numbers and, because he’s very diligent and smart, he asks too many questions that would be inconvenient to the Democrats.  His performance in all regards during the session justified completely that view.
Assembly Republicans across the board have given their highest praise to him, and many Democrats echo their views, but only off the record.
Born in 1978 in New Bedford, MA, Andy graduated from Boston University’s College of Communications and began his professional career as a sports journalist for national media outlets, including FOX.  I’ve read much of his writing, which he turns out rapidly, and he’s an excellent writer.  Because he’s a clear and rigorous thinker, does his homework, and is good with facts and numbers.  Just what we need for Controller, Nevada’s chief fiscal officer.
He realized his real passion is the principles that made America great, and he moved to Nevada, where he’s led battles for liberty, prosperity and individual opportunity since 2006.  He served nearly four years as President of the Nevada Policy Research Institute, a non-profit organization that’s been Nevada’s foremost government watchdog.  NPRI focuses on issues including fiscal accountability, government transparency and education reform.
With Mathews at the helm, NPRI led the intellectual battle against the margin tax ballot in 2014, bringing it down at the polls by a lopsided measure.  They also played a leading role in increasing educational freedom in Nevada, promoting the Education Savings Accounts that put the Silver State at the forefront of the national school-choice movement.
On transparency, under Mathews, NPRI’s outstanding technicians and analysts created the website TransparentNevada.com that’s the standard for extensive, detailed information for all of us on where and how our tax dollars are being spent.
As an Assemblyman, he consistently opposed destructive tax increases.  He also introduced several reform measures to greatly increase government transparency and efficiency.
He says, “Having spent my early life in the liberal Northeast, I’ve gained a deep love and appreciation for the individualism and liberty-inspired ideals of Nevada and the West.”  He recognizes that perhaps the most effective base from which to promote his ideals is as Controller.
“I’m proud of my record fighting for government transparency, fiscal responsibility and pro-growth policies essential to a robust and thriving economy,” he says.  “Nevadans deserve that.”
Besides making government more transparent and accountable to we who fund it, Andy will work to:
Fully utilize Nevada’s recently upgraded financial technological infrastructure to better provide us with accurate, detailed information on all aspects of government funding.
·       Oppose destructive tax hikes and new taxes on hard-working Nevadans.
·       Rein in runaway government spending.
·       Restore fiscal sanity in our state capital.
Like Ronald Reagan, Mathews doesn’t believe government should control your life.  He believes we should have control of our government.
I did the Controller’s job for four years, and I know what it takes.  Andy Mathews has exactly the right combination of vision; technical, analytic and quantitative skill; and great communications talents to be successful.
He’s also a charming and modest person and has the experience, organizational and leadership skills to get the most out of the good folks that staff that office.  And to work with the Legislature, other executive branch agencies and the public and press.
Except for the vision and communications parts, that may all sound a bit nerdy.  Thus the job fit me well.  Andy has the combination of charisma, political skill and nerd that’s exactly right.  He also already has the enthusiastic endorsements of former Governor Robert List, former Lt. Governor Lorraine Hunt and former Attorney General Adam Laxalt.
And he’s getting married September 4 to Valerie Bell, a gem of a lady who’s also a gemologist.
Elect Andy Mathews Controller.
Prev postNext post
Related ItemsRon Knecht
Opinion
Ron Knecht