Another Problem in Academe: Ants and Grasshoppers
Ron Knecht 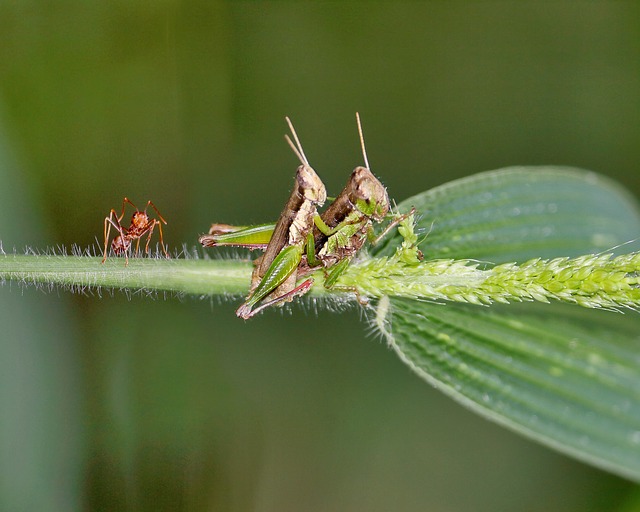 “’The ant and the grasshopper,’ my student Riswanda said, ‘teaches us that we must help others, even if they have not made the most practical decisions.’”
So begins an article in the latest Stanford alumni magazine by Elizabeth Wallace, who spent a year teaching English at an Islamic high school in East Java.  All her students missed the point of Aesop’s fable about the grasshopper who fiddled away the summer and went hungry in the winter, while the industrious ants had full bellies.
Wallace discussed the virtues of hard work and planning ahead, which only seemed to confuse some of her students.  She notes that quantitative measures show the United States is the most individualistic country and Indonesia one of the most communal societies.
The communal culture showed every day to her.  “My host family included two grandmothers, a widowed aunt, three cousins who tinkered with motorcycle parts all day, and a constant flux of distant and unemployed relatives.”  Teachers skipped school to do favors for others.  Good students shared their test answers “with those who had put in absolutely no effort.”
After class, Riswanda asked, “What’s so wrong with playing the fiddle all summer?”
Wallace muses that fiddling added beauty to a dreary world.  The cousins in the basement brought in no income but brightened the day with belly laughs.  Teachers skipped class not because they were lazy, but to help others.  And what seemed like academic cheating could be seen as selflessly lifting up others.
Ultimately, she says, “I’m learning to question my own fable: that you can measure people’s worth by their productivity.”
This illustrates a major problem in recent decades in academe: the display of one’s virtue – here compassion, open-mindedness, sensitivity – as a substitute for real critical thought.  Academe seems unable or unwilling to embrace
necessary conclusions.
Let’s be clear: Wallace isn’t talking about the coercive collectivism of Bernie Sanders and his benighted followers.  She’s teeing up the merits of true voluntary communalism versus individualism and its corollary, market competition, and their resulting productivity.
A worthy debate.  But not one to be decided on whether one feels noble about extending “Grace for the Grasshopper,” (her article’s title) and restraining judgment on the comparative merits of two cultures.  Instead, we should evaluate the objective results of the two cultures, something that offends modern academic sensibilities.
Individualism, market competition and their resulting productivity satisfy what I consider the true public interest: maximizing aggregate human wellbeing and fairness.  Aesop addresses fairness by noting the industrious ants benefited from their productivity, while the grasshopper suffered for his indolence.  This is the inherent fairness of individuality and markets.
What about maximizing human wellbeing?  Empirical studies have shown that societies where at least three-fourths of the economy consists of private markets maximize economic growth.  To many people, economic growth is a boring set of abstractions and numbers with little relationship to human lives.
But economic growth, not belly laughs, pretty music and generosity to others, is what provides true human wellbeing – as good as those other things are.
The day I read the article, I got an epidural to diminish serious neck and arm pains, and I’ll soon have surgery to cure my problems.  Medical technology is a major result of economic growth, and thus of individualism and markets — and of ant, not grasshopper societies.
Today, we have the benefit of early detection and numerous counter-measures for the corona virus.  A century ago, hundreds of millions perished to the Spanish flu.
That evening I talked enjoyably an hour by phone to a close friend three hundred miles away.  At no cost.  A century ago, such a call, if even possible, would have cost three days’ wages.  Economic growth versus cousins’ belly laughs in the basement.
Also a century ago, families spent one-quarter of their income on food, almost always eaten at home, with little variety, much preparation and clean up.  Today, it’s one-tenth, much of it eating out, with vastly greater variety and quality and served with no dishes to wash.
Endless examples like these show the benefits of ant societies’ individualism, markets, productivity and growth.  And why the choice between individualism and even voluntary communalism is not even close.
Prev postNext post
Related Items
Opinion
Ron Knecht