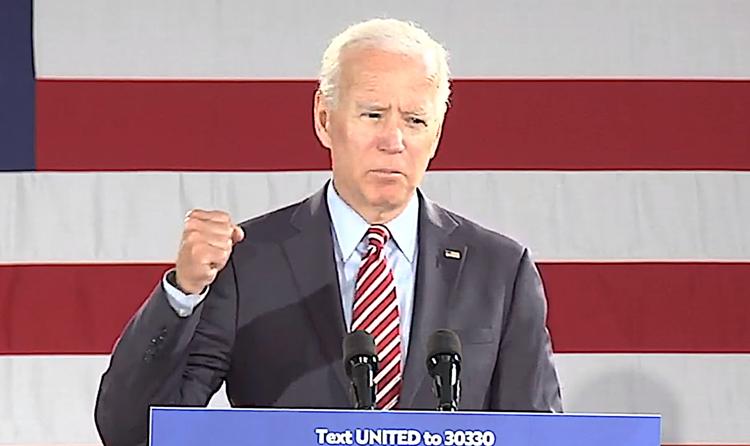 (Ted O’Neil) – A new national poll shows former Vice President Joe Biden with a double-digit lead over his next closest competitor among candidates vying for the Democratic presidential nomination.

The poll was conducted Dec. 27-29 among 2,010 registered voters. It mirrors results of a Harvard CAPS/Harris poll from November, which showed Biden leading the field at 29 percent and Sanders at 16 percent, with Warren and Buttigieg at 13 and 8 percent, respectively.

A Quinnipiac University poll from earlier in December showed nearly identical results, with Biden at 29 percent and Sanders at 17 percent, followed by Warren at 15 percent and Buttigieg at 9 percent.

Other national polls, however, have shown a much tighter race. An NPR/PBS NewsHour/Marist poll in mid-December showed Biden leading Sanders by two percentage points, 24-22, with Warren at 17 percent and Buttigieg at 13 percent.

Monday marks exactly four weeks until the Feb. 3 Iowa caucuses that will kick off the 2020 election season. The New Hampshire primary follows on Feb. 11.

Despite his fourth-place standing among top-tier candidates in virtually every national poll, Buttigieg continues to lead the pack in Iowa and New Hampshire. Biden, meanwhile, maintains a healthy lead in polling in the second two of the “early four” voting states. Nevada holds its caucuses on Feb. 22, followed a week later by the South Carolina primaries.

Biden is also making a strong, albeit late, push in Iowa in hopes of winning supporters away from Buttigieg. He started 2019 with a double-digit lead in the Hawkeye State but continued to slip month after month as Buttigieg spent a great deal of time there.

Reports show that since the beginning of December, Biden has spent 16 days in Iowa, including an eight-day, 18-county bus tour last month that he dubbed the “No Malarkey” tour. A surrogate bus tour is next, featuring former Secretary of State John Kerry and several Iowa elected officials.

Biden also recently picked up what political pundits consider to be two key endorsements in the state, those being Rep. Abby Finkenauer and Tom Vilsack. Finkenauer is the second-youngest woman ever elected to Congress and Vilsack is a former governor and U.S. Secretary of Agriculture.