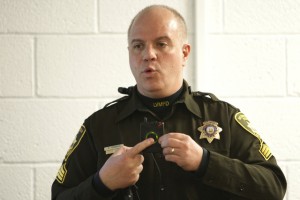 (Sean Whaley) – Carson City — A state lawmaker said Monday that equipping police officers with body cameras could resolve disputes over allegations of unreasonable force before they morph into civil unrest as happened with a police shooting in Ferguson, Missouri, last year.

Assemblyman Harvey Munford, D-Las Vegas, testified in support of Assembly Bill 162 that would mandate the use of the cameras by most law enforcement agencies.

“The bill will not solve all of our problems between law enforcement and the community they protect,” he said. “However it is a start.”

Outfitting Las Vegas Police with the technology would be expensive, however, and could jeopardize the prospects for the bill.