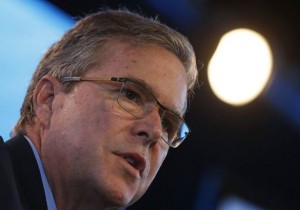 (Laura Myers) -The Sheldon Adelson primary continues apace, but it looks like Jeb Bush might have been at the wrong place at the wrong time when he visited Las Vegas on March 2.

As a result, the former GOP governor of Florida did not get a chance to chat in person with Adelson while he was in Las Vegas, although Bush met with some other big donors to his likely presidential campaign. Adelson lives in Las Vegas with his wife, Miriam.

While in town, Bush visited a seniors community in Sun City Summerlin and told Nevadans not to mistake him for his brother or father, both of whom have served as U.S. president.