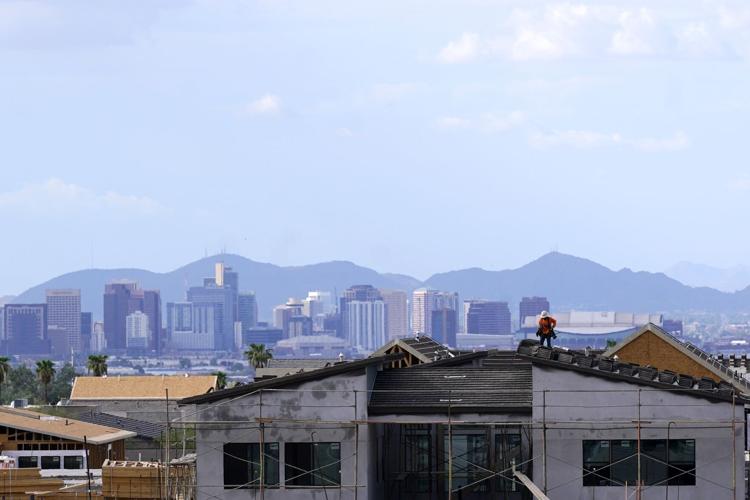 In this Aug. 12, 2021, file photo with the downtown skyline in the background, a roofer works on a new home being built in a new housing development as expansive urban sprawl continues in Phoenix.
Ross D. Franklin / AP

(Bethany Blankley) – Demand for homes in certain areas of the country has caused supply to dwindle, prices to skyrocket and buyers needing nearly 50% more income than they would have last year to even enter top markets, according to a report by the real estate brokerage firm, Redfin.

“Housing is significantly less affordable than it was a year ago because the surge in housing costs has far outpaced the increase in wages, meaning many Americans are now priced out of homeownership,” Redfin Deputy Chief Economist Taylor Marr said.

Because more people are working remotely and can live anywhere to work, many are flocking to cities in the Sun Belt, with the most popular destinations being Tampa, Phoenix and Las Vegas. They are also the most expensive, with potential homeowners needing more than 40% more in income than they did last year to buy.

Buyers are flocking to the Sun Belt “partly because they’re relatively affordable compared to pricey coastal job centers, but the resulting rise in home prices may make them less popular in the future,” the analysis found.

Tampa has quickly become the least affordable market, with homebuyers needing 47.8% more income than they did a year ago, more than in any other metro area in the U.S., the report found.

Home buyers in Tampa would need to earn $67,353 annually to afford a monthly mortgage payment of $1,684. Last year, they needed to earn $45,562. Most workers don’t make a $21,791 increase in their salary in one year, let alone in a decade. That means many who might have been able to afford to buy last year have been priced out. But those who can are buying with the median sale price hovering at $363,750.

Homeowners need nearly 40% or more income to buy in Orlando and Jacksonville, Florida, in Austin, Fort Worth and Dallas, Texas, in Anaheim and San Diego, California, and in the metro areas of Nashville, Atlanta and Charlotte, North Carolina.

Redfin analyzed median home sale prices between March 2021 and March 2022. It focuses on affordability based on buyers taking out loans, not paying cash. It defines a monthly mortgage payment to be one that is no more than 30% of a homebuyer’s income.

Nationwide, Americans are migrating despite high costs, or because of them. A seller leaving New York with a median home sale price of $677,654, for example, is more likely to afford purchasing a home in Las Vegas or in Tampa even if the homes are overvalued there because they are far less expensive than in New York. Likewise, the cost of living is less, and Nevada and Florida levy no state income tax.

A record 32.3% of Redfin.com users nationwide looked to relocate to a different metro area in the first quarter of this year, a separate Redfin analysis found. That’s up from 31.5% a year earlier, and up 26% from 2019.

“Skyrocketing home prices and rising mortgage rates have made relocating to a more affordable area the only viable option for some prospective homebuyers,” the report notes.

While housing costs skyrocket, wages are increasing but not at near the same pace. The average hourly wages in the U.S. grew by 5.6% last year, according to Bureau of Labor Statistics data. Over the last decade, median home prices increased by roughly 30% while household incomes increased by 11% over the same time period, a Bankrate analysis found.

From 2019 to 2021, “the average house-price-to-income ratio increased from 4.7 to 5.4 — a 14.9% increase and more than double the recommended ratio of 2.6. In other words, homes cost 5.4X what the average person earns in one year,” an analysis by Clever Real Estate found. It also notes that since 1965, after accounting for inflation, home prices increased by 118% while household incomes increased by only 15%.

As home prices outpace wages, inventory continues to decline. An analysis by the National Associations of Realtors and Realtor.com points out that a household earning $75,000 to $100,000 can afford to buy 51% of the active housing inventory today compared to being able to purchase 58% of the homes for sale in 2019.

One possible course correction could come from the Federal Reserve raising interest rates, and thereby mortgage rates. Marr notes, “The good news is that there’s a positive side to rising mortgage rates, too: They will likely slow price growth and curb competition for homes, providing a reprieve for some prospective buyers.”