Can Ted Cruz save the Internet?

Can Ted Cruz save the Internet?
N&V Staff 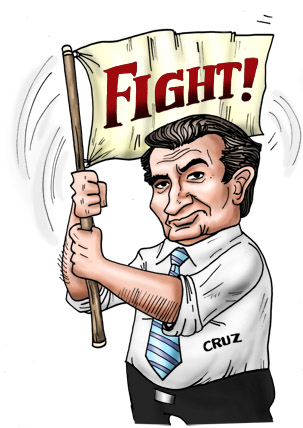 (Robert Romano, NetRightDaily.com) – Remember last year it was announced that the Obama administration planned on transitioning control over the Internet domain name system to the international community and the Internet Corporation for Assigned Names and Numbers (ICANN)?

It was such a big deal that Congress last year voted to defund such a transfer from occurring in fiscal year 2015 in the omnibus appropriations bill.

The House just weeks ago voted to again defund the transfer in the Commerce, Science, and Justice appropriations bill.

But now, the House has made a tremendous error. On June 23, wittingly or unwittingly, the House voted overwhelmingly to authorize it.

The framers of the legislation, the so-called Dotcom (Domain Openness Through Continued Oversight Matters) Act, pretend that it will “prohibit the National Telecommunications and Information Administration from relinquishing responsibility over the Internet domain name system…”

That is, “Until the date that is 30 legislative days after the submission to Congress of [a] report” by NTIA making certain certifications that everything will be okay with the transition.

In other words, the very bill that purports to “prohibit” turning over the administration of vital Internet functions — governing the assignment of domain names and Internet Protocol (IP) addresses — actually authorizes their giveaway.

All the Obama administration would have to do is turn in a book report to complete the transition.

That is, if NTIA even complies with the weak reporting requirement.  In the same omnibus that had defunded the transition, Congress required NTIA to submit a report due January 30 “regarding any recourse that would be available to the United States if the decision is made to transition to a new contract and any subsequent decisions made following such transfer of Internet governance are deleterious to the United States.”

In response, NTIA told Congress, “Our preliminary answer is that the criteria for the plan that NTIA established in its March 2014 announcement will ensure an outcome that is not ‘deleterious’ to the United States.”

NTIA continued, “Nonetheless, NTIA understands the concerns of Congress in this regard and will regularly revisit this question during the planning process and when evaluating the ultimate ICANN-submitted proposal to ensure that the final plan is not deleterious to the interests of the United States and its Internet stakeholders.”

The report was a slap in the face of Congress, which had asked for a contingency plan in case anything goes wrong with the Internet transition. For example, what if the IANA functions are captured by foreign powers? What if the functions are abused to engage in censorship? Apparently NTIA cannot be bothered to come up with a Plan B just in case.

Expect more of the same when NTIA submits its Dotcom Act report, with its meaningless certifications it has already made in numerous press statements.

As Americans for Limited Government President Rick Manning noted in a letter to the House urging opposition to the Dotcom Act, “NTIA’s response underscores the weakness of using easy-to-copy-and-paste reporting requirements in place of real oversight and using the congressional power of the purse to block the transition.”

Manning added, “The Dotcom Act could easily be amended to affirm Congress’ power to have a say in any transition, for example, via its Article IV constitutional ‘power to dispose of … property belonging to the United States.’”

Sadly, the House, wittingly or unwittingly, passed on that opportunity by adopting the bill on suspension of the rules — a procedural move that prevented any amendments from being offered on the floor that might have fixed it.

Fortunately, there is at least one Senator on the Commerce Committee who is willing to fight to protect U.S. government oversight of the Internet, which guarantees First Amendment protections for everyone that uses the Internet’s domain name system: Sen. Ted Cruz (R-Texas).

When the Dotcom Act goes for mark-up in committee on Thursday, June 25, Cruz will be offering an amendment that will require an affirmative vote of Congress before any transition can be performed. That’s it.

It fixes the bill and gives Congress an opportunity to actually see the Obama administration’s proposal for transferring Internet governance before approving it. Pretty simple. Why would anyone oppose that?

Cruz’ amendment is certainly a better approach than what the House just did, which was to authorize the transfer, trusting the Obama administration to get the details correct — which now ICANN CEO Fadi Chehade concedes will not even be ready until at least June 30, 2016.

That alone should have given members of the House pause. Fortunately, the Senate Commerce Committee has an opportunity to correct this mistake by adopting the Cruz amendment.

The Internet transition is not ready for primetime. And Congress must reserve the right to reject it should it prove to be a bad deal for America — and everyone else who depends on the Internet remaining free and open.

NetRightDaily.com is a project of Americans for Limited Government. The project, launched in August of 2008, offers liberty-minded thought on the federal government as well as the threats that exist to individual liberty at all levels of government.

N&V StaffOctober 4, 2022
Read More
Scroll for more
Tap
Harry calls for changes in symbols, some of which he has ignored for four decades
Roll Call: Obama gets trade win; Democrats give in on TAA