Roll Call: Obama gets trade win; Democrats give in on TAA

Roll Call: Obama gets trade win; Democrats give in on TAA
N&V Staff 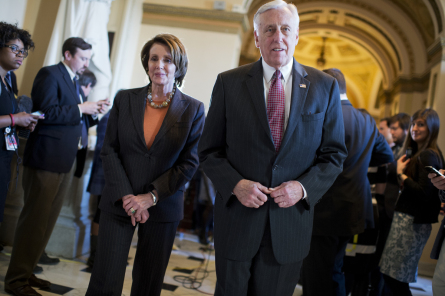 That’s how several House Democrats and senior aides described the current feeling in the caucus regarding their efforts to stop “fast-track” trade authority for the White House.

Over the past two weeks, most members of the House Democratic Caucus have gone from opposing Trade Adjustment Assistance legislation — packaged with the related Trade Promotion Authority, a Republican and Obama administration priority — to acknowledging there’s little point in voting “no.”

Some of TPA’s most vocal critics, among them Rep. Rosa DeLauro of Connecticut and Ways and Means ranking member Sander M. Levin of Michigan, informed colleagues Wednesday morning during a closed-door meeting they would vote for a broad trade-preferences bill that includes TAA, despite concerns the legislation, a longtime Democratic favorite, doesn’t do nearly enough to train workers displaced by global trade.

House Minority Whip Steny H. Hoyer, D-Md., and Caucus Vice Chairman Joseph Crowley, D-N.Y., also announced their support for TAA at that meeting. It’s expected to hit the House floor Thursday, if all goes according to plan on the other side of the Capitol.

Sources described the meeting as contentious, with members clamoring for Minority Leader Nancy Pelosi to articulate her position. They complained she was being purposefully vague on her stance while she waited for labor groups to put in writing their permission for lawmakers to vote “yes” on TAA.

N&V StaffOctober 4, 2022
Read More
Scroll for more
Tap
Can Ted Cruz save the Internet?
Who gets to say what, wave what flag and have what mascot?