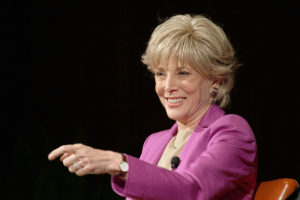 Last week, Lesley Stahl disgraced herself on CBS’ 60 Minutes.  And had her ass handed to her by, of all people, a Russian news executive.

Growing up as a journalist in the late 60’s and early 70’s the biggest game in town was 60 Minutes.  Some of the time, even today, it still is.

The CBS News team, which leans to the far left every day, is sometimes left behind on 60 Minutes.  Even last Sunday on the same show, Scott Pelley did an incredibly thoughtful piece on a computer project in Chicago seeking to predict from arrest records who is most at risk of being arrested again and what the Chicago Police Department is trying to do to prevent that from happening. In short, sometimes real journalism prevails on the network of the late Edward R. Murrow.

But Stahl, a proud affirmative action hire from the days of the Nixon administration, could not help herself.

Interviewing Margarita Simonyan, who runs the network RT for the Russian government, she said of alleged Russian interference in the 2016 election, “which our intelligence agencies tell us happened. And—I believe…”

RT is Russia’s version of Al Jazerra.  And has a similar viewership, which is to say that there are small town TV stations running infomercials which have more people paying attention to them.

The thought that an institution which doesn’t even hide the fact that it is owned by the Russian government could swing a Presidential election here is right up there with the thought that we created the moon landing on a Hollywood sound stage.

There may be people in the United States that stupid, but they probably don’t vote in numbers large enough to swing 304 electoral votes..

Yet Stahl insinuates through the entire piece that RT influenced the outcome of the election.

Think about it for a minute.  She works for CBS.  Donald Trump had CBS, NBC, ABC, CNN and MSNBC totally in the tank for his opponent and now CBS is insinuating that it was a network which few people have ever heard of that was responsible for his election?

It is moronic suppositions like that which is why what we now refer to as the “mainstream” media has a tough time even being believed by the left.

Newsflash, Lesley:  The demographics of those outlets overwhelmingly favor millennials who, if they voted, were overwhelmingly in favor the President’s opponent.

In short, apparently spending 45 years at CBS news doesn’t make you very smart—at least not in her case.

But her elitist assumption that American voters are so stupid that a relatively small Russian TV network, which operates in the open, could influence them in big enough numbers to swing a Presidential election has certainly never gone away.

Such an assumption simply defies credulity.

And so does the companion assumption that Russia was executing a secret campaign.

The fact is that nothing was secret.  Including our own country’s attempts to meddle in other nations’ elections.

The only explanation for Stahl’s piece is a dying gasp of the left’s campaign to place the blame for Trump’s stunning (to them) win over an opponent they had anointed on anything but the truth.

She should be ashamed.  And so should the rest of CBS News.

The Center SquareApril 21, 2020
Read More
Scroll for more
Tap
We All Win with the Federal Tax Cut and Reforms
There has never been a bill like this