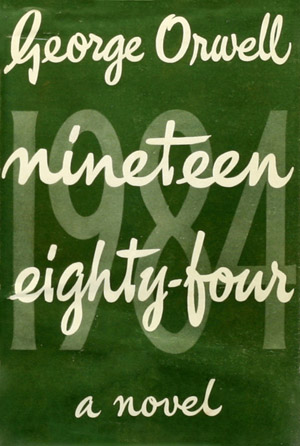 The plot’s chief character was Winston Smith who worked at the “Ministry of Truth” “correcting” records that did not conform to the policies of big government.  “Corrected” records were consigned to the “Memory Hole” from which they were never recalled.  The “agent” of big government was an omnipresent electronic “Big Brother” which would instruct people how and what to think.

It’s not hard to see some of these concepts emerging in the United States.  Students at Berkeley and other colleges conceptualize “micro-aggressions” which they define as comments or actions by others, however innocent, that the observer perceives as threatening to his/her preconceived notions.  They believe that college administrators have a duty to provide them a “safe” place where they will be free of such threats.  Another Orwellian outgrowth is the concept that anything that such students do not wish to hear is “hate speech” and not protected by the US Constitution.

Still another tentacle from Nineteen Eighty Four emerged from the recent disruptions in Charlottesville, Virginia.  An admittedly scumbag organization composed at least in part of white supremacists sporting swastikas and Ku Klux Klan symbols obtained a permit to demonstrate against removal of a statue of Confederate General Robert E. Lee.   An equally scumbag group wearing face masks and carrying various weapons showed up and violence occurred resulting in many injuries and death of one demonstrator.

The liberal American Civil Liberties Union of Virginia reported:  “Not sure who provoked first.  Both sides were hitting each other at Justice Park before police arrived.”  Reuters News Service reported: “Counter-protesters likewise came equipped with sticks, helmets and shields.”  NBC Nightly News reported:  “Witnesses say both sides came prepared for a fight.”  When the media sought a statement from President Trump he said:  “I think there is blame on both sides.”

But facts are irrelevant when it comes to the media scouring Trump  How, reporters editorialized, could he possibly say both sides were wrong when one group consisted of white supremacists?  The Chicago Sun Times called him “America’s bigot in chief.”  CNN’s Anderson Cooper sneered:  “We can truly say his words have absolutely emboldened white supremacists.”  Democratic Senator Ben Schatz of Hawaii said: “This is not my president.”  Then other elected Democrats began to pile on.  Not to be outdone “idiot Republicans” (a term created by author David Horowitz) also began to pile on.  Amazingly this Orwellian “Big Brother media” one-sided criticism dominated the news cycle until terrorists struck in Barcelona.

Deafening criticism of Trump was accompanied by an outcry to tear down all monuments to the old Confederacy because they are a symbol of slavery.  President Trump reasonably inquired whether monuments commemorating George Washington and Thomas Jefferson should also be torn down because they were both slave owners.  Some leftist, who apparently fell asleep in history class, defaced a statue of Abraham Lincoln.

This whole chaotic mess congers up memories of torturing heretics, Nazis burning books, the Taliban destroying ancient Buddhist statuary and other such tragedies fueled by political or religious extremism.

Perhaps the most egregious charge is filmmaker Michael Moore’s invective that “everyone who supports Trump is a racist” but then you learn to expect stuff like that from Moore.  Interestingly of the four arrests made by the reluctant Charlottesville police two were associated with the white supremacy group and two were left-wing “Antifa” (for “antifascist”) counter-protestors.

And yet the alt-left media, Democrats and “idiot Republicans” (apparently concerned about next year’s election) demand that the criminal actions of the ”Antifa” be consigned to the “Memory Hole” and, in the words of Bobby Burns, “be forgot and never brought to mind.”