So let me get this straight…

A group of about 100 conservatives – who specifically and publicly condemned racism and totally distanced themselves from the white nationalists and neo-Nazis of Charlottesville fame – got a PERMIT for a rally in Boston on Saturday in support of free speech.

Let me repeat that: In support of free speech.

What is the matter with these people?

There were scattered dust-ups with police officers – including violent alt-left jerk-faces who threw rocks and bottles filled with urine at the cops.  But unlike the Charlottesville PD, Boston’s cops refused to stand down and kept everything under control.

You do NOT want to mess with an Irish cop in Boston!

That said, make no mistake: The whole reason all of this is going on in this country right now is the race-baiting efforts of the left to “blackwash” U.S. Civil War history by removing statues of Confederate soldiers from public grounds. 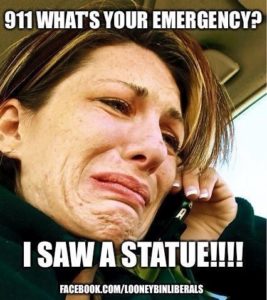 And that includes former Democrat House Speaker Nancy Pelosi, who this weekend called on Republican House Speaker Paul Ryan to remove all Confederate statues from the Capitol.  Leading our friend and Atlanta talk-show host Herman Cain to ask…

“They weren’t a problem when she was Speaker?”

BAM!  Exactly.  Why didn’t she remove them years ago when she was in power and had the chance? What a hypocrite.

The fact is this is a totally fabricated “national crisis” foisted upon our nation by race-hustlers and the fake news, not racists.  As former NBA star Charles Barkley put it this weekend…

“I’ve always ignored them.  I’ve never thought about those statues a day in my life. I think if you asked most black people to be honest, they ain’t thought a day in their life about those stupid statues. What we as black people need to do: We need to worry about getting our education, we need to stop killing each other, we need to try to find a way to have more economic opportunity and things like that. Those things are important and significant. You know, I’m wasting time and energy [if I’m] screaming at a neo-Nazi, or [saying] ‘Man, you’ve got to take this statue down.’ ”

The problem is…there are an AWFUL lot of people on the left who have an AWFUL lot of time and energy to waste on this Taliban-like War on Statues.  And they couldn’t care less if it’s ripping the nation apart.

Heading out tomorrow morning for five-hour drive to Phoenix to attend the Trump rally there tomorrow night.  Oh, how I hope he pardons Sheriff Joe!

Then five-hour drive to San Diego on Wednesday for a marketing conference on Thursday.

Day of rest Sunday.  Then seven-hour drive back to Vegas on Monday after a morning meeting in Reno.

The reason I mention this is because, as you can see, I’m not gonna have a lot of time to write for the next week.  However…

Over the next few days I expect the 2-for-1 Early Bird special for the upcoming Conservative Leadership Conference is going to expire early…as a NEW special offer being made exclusively to folks already registered will likely sell-out the remaining tickets by the time I get back to the barn.

Look for an email explaining all the details later today and be ready to take action. Cheers!

“People who want these statues removed, they’re a bunch of whiny babies.  If you’re offended, don’t go look at them.” – Johnnie Hayes of Brandenburg, KY, a town that has offered to take any and all Civil War era statues from other municipalities and display them in their own community