Steve Bannon’s departure from the White House is, indeed, a cause for concern for conservatives.  As the saying goes, personnel is policy.  And Bannon was generally considered the driving force behind the conservative agenda in the Trump administration. 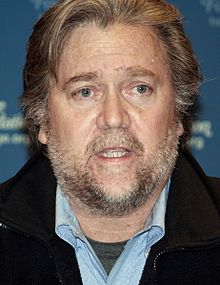 But we don’t know exactly what was going on behind the scenes in the West Wing that may or may not have had anything whatsoever to do with policy.

I just know I voted for Donald Trump for president last November.  I did not vote for Mr. Bannon or Reince Priebus or Sean Spicer or Anthony Scaramucci or Mitt Romney or John McCain or Lindsey Graham or John McCain or Mitch McConnell or Paul Ryan or any of those lily-livered corporate weenies who turned tail and ran this week when it got a little too hot in the kitchen.

And NO PRESIDENT has ever had to deal with a liberal media as hostile as today’s fake news media that will attack this guy NO MATTER what he does or says.

As such, I continue to give Mr. Trump the benefit of the doubt and trust he’s doing exactly what he believes he needs to do to both protect himself and Make America Great Again.

As for Mr. Bannon, I think he’s right about returning to his former role as head of Breitbart News.  Like Josey Wales, “Bannon the Barbarian” can help the conservative cause best from outside the building on the back of a horse.

“I feel jacked up,” Bannon said on Friday.  “Now I’m free.  I’ve got my hands back on my weapons.  I’m definitely going to crush the opposition.  There’s no doubt.  I built a (expletive) machine at Breitbart.  And now I’m about to go back, knowing what I know, and we’re about to rev that machine up.”

In a separate statement he wrote:

“If there’s any confusion out there, let me clear it up: I’m leaving the White House and going to war for Trump against his opponents – on Capitol Hill, in the media, and in corporate America.”

Sounds like this is gonna be a good thing in the long run.  Let the crushing begin!

P.S.  As part of the ongoing effort to blackwash U.S. history, under the cover of darkness in the wee hours of the morning on Friday the State of Maryland removed a bronze statue of former Supreme Court Justice Roger B. Taneyfrom the statehouse grounds and carted it off.

There’s actually precedent for this one in Maryland though.  It’s the same thing owner Robert Irsay did with the Baltimore Colts in 1984.

Yeah, as a Baltimore native I’m still bitter about that one!

“[Kid Rock] ain’t running for jack squat. Okay? He never intended – he never thought about it. … He ain’t running. He never thought of running. Somebody literally pulled it out of their ass and said, ‘Hey, what about Kid Rock?’ Kid Rock didn’t know anything about it. He’s just having fun with it because it’s so silly.” – Ted Nugent, discussing Kid Rock’s chances of running for Senate on a Michigan radio show (Hat tip: Morning Score)