The word hero was thrown around a lot last week by a lot of people who should know better when they were talking about the death of John McCain. 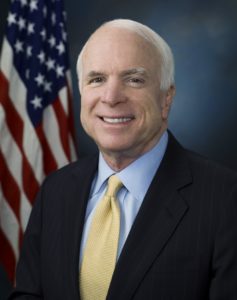 John McCain was NOT a hero.  No more than Dale Earnhardt, Michael Jordan, Mickey Mantle or any other athlete.

He was a very honorable man who got along with a wide variety of people, he served our nation in Viet Nam and he had high moments and low moments in a lengthy political career.

But as a man, he was no more or less important than, say, President Trump.  And to allow his funeral to be a dig at the President doesn’t serve his memory very well even if it was his wish. It was a self-indulgent final act which clearly did not come from the bigger man he always professed to be.

There were a lot of self-satisfied members of the Washington political class in attendance but many average Americans—those who had enough in 2016 and put an outsider in the Presidency—saw it for what it was; a posthumous exhibition of McCain’s pique at Trump for the slight of having beaten him soundly in the primary and telling the truth in the process.  Yes, McCain served about five and a half years as a prisoner of war after he was shot down over North Viet Nam.  No, that does not qualify you to become President.

Hero is a very high bar.

Heroes are people who save other lives.  Todd Beamer and his compatriots on United Flight 93 who took the plane down in Shanksville, Pennsylvania rather than allow a bunch or terrorists crash it into a target, presumably the Capitol or the White House on 9-11.  Those folks were heroes.

Those of the more than 55,000 people who died in Viet Nam while saving others’ lives.   Those folks are heroes.

A 32 year career in the Senate is—let’s face it—20 years too long.  There’s no special skill a Senator must have save bloviating which justifies doing it more than twelve years.

Our Founding Fathers neglected to put term limits into the Constitution because they mistakenly assumed that the ballot box would serve as those limits.  That was before money and television and air travel came along and serving in Washington was actually a burden.  Now, unfortunately, it has become a career with a lot of perks.

What John McCain was, was a Citizen with a capital C.  He was, like all the rest of us, an imperfect one, although he was clearly a patriot.

While McCain was, indeed, an honorable man, he was no more or less honorable than most. That’s not a lack of respect for the late Senator.

This is the United States of America.  We don’t have royalty here.  Just Citizens.

And we were founded by imperfect men who mostly believed that all men are created equal.

John McCain was a Citizen.

For anyone—including him—to use his own death as a way of carrying out one more political statement which was basically meaningless only diminishes the service John McCain gave to the nation.

People—including McCain and members of his family—who do not like the sitting President often think that a President has to come from a lifetime of politics as opposed to a lifetime of anything else.

They are wrong, as President Trump has clearly proven.