On a recent trip to New England, James and his wife Vicki were flying with Vicki’s service dog, Oreo.  As with many Reno originating flights, they needed to fly to Las Vegas before connecting to Hartford, Connecticut. 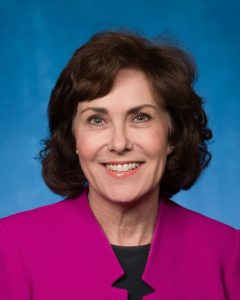 Oreo is a service animal, trained to monitor Vicki’s blood sugar changes and notify her, preventing her from physical harm from her diabetes.  Oreo is very good at her job, which she takes seriously.  She is incredibly accurate, as anyone who has seen her alert on Vicki can attest.

Oreo is particularly important when Vicki is sleeping, because she has had significant sugar drops in the night.  Oreo will wake her to get her to test and elevate her sugar before going back to bed.  Because this sweet pretty little pup performs such services so well, Vicki can live a normal life.

Back to the flight from Reno to Las Vegas.  Although they did not see her sit down, Democrat U.S. senate candidate Jacky Rosen sat in the row immediately behind the Smacks on the flight.

During the flight, Vicki overheard Congresswoman Rosen making disparaging remarks about dogs being on planes and saying she does not allow dogs into her Congressional offices.

Congresswoman, you may want to review the Americans with Disabilities Act (ADA) as part of your campaign.  The ADA allows a service animal such as Oreo to fly on any commercial airline at any time.  It also allows service animals to go nearly anywhere with their persons, likely including your Congressional offices.

So, our question to you is this: “Are you satisfied violating the Americans with Disabilities Act simply because you dislike dogs or for whatever reason?”

So much for liberal tolerance.

James and Vicki will be the first to admit there are far too many people with dogs in airports, and many are not well behaved.  A dog on public transportation in Portland lunged at Oreo.  A German Shepard, supposedly a service dog, lunged at her in the Denver airport when the Smacks were walking between flights on one of their trips.

We submit that any dog going after other dogs, whether in a friendly manner or otherwise, in a place like an airport or on public transportation, is not a good service animal.  Oreo is trained to do her job, and the environment around her has limited effect on her performance of it.

Given these personal incidents, plus the growing number of people with emotional support animals who bring them on planes even though they are not well trained, we agree such animals can be a nuisance with barking and disturbing other passengers.  We would agree with the Congresswoman that there are plenty of dogs that have no business being on a plane other than in the cargo hold.

When James and Vicki are on flights, most passengers don’t even know Oreo is there.  That, Congresswoman Rosen, is a well-trained service animal.  The only reason you knew she was there is because you were sitting right behind James and Vicki and you saw Oreo on Vicki’s lap.  Sleeping.

However, we would caution you against judging every dog by the actions of a few.  There are many dogs, just like Oreo, that fly every day and cause no problems.  Having a service animal allows people like Vicki, with a disability visible or invisible, to lead normal lives.

Oreo has attended football and baseball games, traveled cross country several times on planes, been on boats and trains, and attended a Neil Diamond concert.  Her favorite song?  Sweet Caroline, of course!

A well trained and disciplined service animal should not be a nuisance to others and is a valuable partner to its human.

Congresswoman, we hope you learn the provisions and protections of the ADA.  James and Vicki would be happy to meet with you and introduce you to Oreo.  They would not only detail their concerns about what you said, but also work with you on constructive ideas to keep animals out of airports and off flights that have no business being there.

If you don’t want Oreo in your office, Ron is quite willing to host sch a meeting in his office the next time you’re in Carson City.