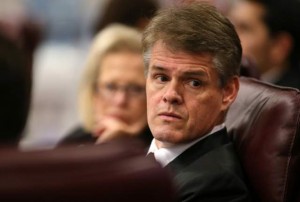 Edwards has accused Dane and others of trying to extort him over a leadership fight within the Republican Assembly Caucus earlier this year before the start of the 2015 legislative session.  It was discovered that Edwards had secretly “worn a wire” and taped conversations with colleagues and dozens of others not even remotely involved in the matter.

Dane’s attorney, David Otto, is not amused, or apparently worried, about the investigation.

“A grand jury will indict Rudolph the Red Nosed Reindeer if the DA asks them to do it,” Otto told the German.  “This is nothing but a follow-up to their fascist fear tactics to intimidate lawmakers.”

The entire scandal began when some conservative legislators and activists accused Edwards of soliciting campaign donations in return for his vote in the contentious post-election leadership fight for Assembly speaker in December 2014.

Most experienced political professionals have chalked up the “let’s make a deal” aspects of this matter as nothing more than old-fashioned political you-scratch-my-back-I’ll-scratch-yours horse-trading and see the grand jury investigation as nothing short of the DA trying to criminalize political action.

You can read the full story by clicking here