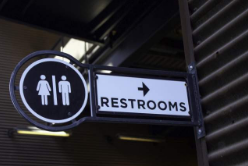 (Neal Morton, Las Vegas Review-Journal) – Clark County District is yet to announce its comment on the newly-released federal guidance about the requirement of schools pertaining the transgender student rights until it received the official notice of said document.

The federal directive, that was released Friday in a “Dear Colleague Letter” through the joint effort of the Department of Education and the Department of Justice,  specifically orders the schools to give transgender students fair and non-discriminatory treatment in schools by allowing them to use the bathroom of their chosen gender the same as that used by non-transgender students.

For the time being, Clark County District considers providing separate facilities for the transgender students. In fact, its finance department is already studying the costs associated to such accommodation. Family bathrooms are even part of their plan in pursuing the advocacy against transgender discrimination. Some campuses do also have single-use restrooms that may be allowed to students at their request.

However, these supposed plans would probably be deduced to naught after the guidance was released.