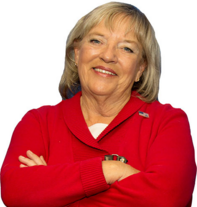 Connie Foust, a Mesquite Conservative Republican and life-long, has declared her candidacy to represent Assembly District 19 in Nevada’s state legislature.

In 2014, many of our elected Republicans ran on promises to not raise taxes. Unfortunately, during the 2015 legislative session, many of these same Republicans did just the opposite and voted to raise our taxes!  Connie made the decision to run after seeing so many of them, including the AD19 Assemblyman, break their promises.

According to Connie “It is time to elect an assembly representative that actually listens to the voters!  If over 80% of the voters in AD19 said ‘no’ to new taxes, as they did in November, 2014, then one would think they do not want any new taxes? Voting in favor of 26 out of 32 tax bills is not listening to the voice of the voters in our district.  If we want things to change for the better, public servants need to go back to the basics of actually serving the people they represent.”

Foust’s platform is based on the values and principles of the majority of voters in AD19.  Connie has already commissioned several different polls since the 2015 Legislative session ended last June to see what her voters support.  Based on the results, her priorities reflect the priorities of her district:  lowering taxes, making the Clark County School District more accountable to rural communities, eliminating crony capitalism in favor of fostering a prosperous business environment for all, and the one principle that underlies all others, keeping campaign promises.

In Foust’s own words, “If I tell you I am going to do something, you can bank on it!”

Connie Foust understands that every bill passed in the State of Nevada affects one or more aspects of our lives.  It is unconscionable that some of our politicians disrespect their constituents by voting against the general welfare of all Nevadans to benefit the privileged few.

“I will always vote with the understanding that I’m representing the lives and hopes and dreams of real people in my community, not special interest groups, not hired lobbyists, and not the governing elite in Carson City,” Connie said.

For more information about Connie Foust and her campaign, visit www.ConnieFoust.com.

N&V StaffOctober 3, 2021
Read More
Scroll for more
Tap
When NO shot was heard around the world
Blame Sandoval for the Trump Revolt and Rebellion