Coulter, Wallace Are Idiots, Congress Composed of Morons, Perhaps in Love With Heroin, Fentanyl or Cocaine 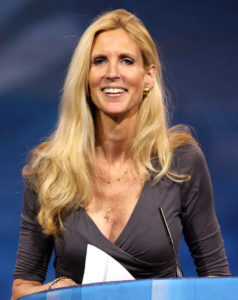 Fox News’ Chris Wallace, to go all Ann Coulter on him, is an idiot. (She’s a moron.)

The son of the inimitable (and late) Mike Wallace seems to have decided that President Trump’s National Emergency declaration is, somehow, wrong and, to support his unsupportable position, is hanging on to a slim fact—that 90% of the drugs seized are coming through ports of entry. He brought that up to Trump advisor Stephen Miller on last week’s Fox News Sunday and Miller slapped him down so hard that even Wallace’s late father must have winced.

Here’s the problem with that Wallace’s paper thin “fact”.

Given the drugs being consumed in the United States today, that’s not a pimple on this nation’s butt.

The truth is that we have no idea how much is coming through unsecured areas.

Let’s put this another way.

Here’s what we DO know. Much of the heroin, fentanyl and cocaine coming into the country is coming from sophisticated drug cartels. Do you think these guys are sending drugs through ports of entries so they can lose them? Is it possible these same cartels are also sending drug shipments through unsecured areas? You think?

As my kids would say, Duh…

On what planet does a nation as wealthy and powerful as the United States not secure its borders. On what planet is a wall considered immoral as stated by Nancy Pelosi and Robert Francis O’Rourke?

In January, just miles from where I live, there were four murders committed by an illegal alien—two in Reno and two in Douglas County to the south. This guy had a speeding ticket in 2018. He should have been deported then. But nooooo. That’s a “low level” crime because it seems that his first crime of crossing the border illegally is hardly a crime at all.

And, if wanting to deport someone who is already in the country illegally for any reason makes me a racist, so be it. You can call me and my fellow Americans Mr. Jim Crow.

What this is all about is hatred for Donald Trump. He had the gall to win an election he was supposed to lose to Hillary Clinton by 7 points.

If he cured cancer the opposition would be yelping that he is overpopulating the planet,

And then, there is Congress.

It has an approval rating of somewhere between 11 and 18 per cent which is to say that even their mothers don’t like them.

Immigration reform has been on the docket since the Reagan Administration and nothing has been done.

That’s because one side, the Left, wants a permanent underclass with voting rights and the other side, the Right, wants cheap labor.

The American people—those who live outside of Washington, New York, Los Angeles and San Francisco—just wants Congress to do its job. And its job is not precluding all immigration—just that of people we don’t know and cannot verify as law abiding.

The nonsense from both sides in their defense against the President’s invocation of the National Emergencies Act of 1976 is that this isn’t an emergency.

We would submit that if drug cartels, murders and allowing these humps in our nation essentially unchecked because of activist judges isn’t an emergency, maybe we need to blow up Iowa with a tactical nuclear weapon and see if that’s an emergency.

The 1976 law does not set parameters on what a President declares an emergency. Our buddies in Congress passed that law and delegated those responsibilities to the President and Commander in Chief.

If the Washington and New York based media doesn’t think this is an emergency, perhaps they ought to ask the folks in Tulsa, or Peoria or Dallas.

They might find out that only in Washington does an emergency mean something which could cost you your elected position.