Gates Has Proven That Smart Investing Works When You Want To Change the World, Too 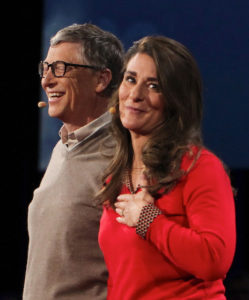 There are a lot of things I do not agree with Bill and Melinda Gates about—mostly political.

But there is one huge thing which not only do I agree with but am cheering them on and that is their approach to philanthropy.

Bill Gates is a very smart guy. He became unbelievably wealthy because he saw the value in software when most people were wondering if a personal computer would ever catch on and he executed.

He and his wife’s approach to giving most of that money away is very reminiscent of how he made Microsoft successful—that is, they approach philanthropy as if they were running a venture capital fund and expect a high rate of return from the money they invest in a particular problem.

The key word here is invest.

Too many philanthropists see a problem and shower money on it in hopes it will be solved.

The Gates are treating it as very successful businesspeople do

Only, instead of bringing out a new version of Word, they want a toilet which will work without a sewer system so that everybody has something which we take for granted here.

Or they look at employment prospects in Africa because, unlike developed nations like ours, the median age in Africa is 18 which means that, properly incentivized, Africa could become very productive for a very long time.

The thing which is most impressive about the Gates’ philanthropic efforts is that they have discovered that, many times, the simplest solutions can make a big dent in major problems.

Take the war on Malaria. One of the tactics the foundation has discovered is the simple bed net infused with a much longer lasting insecticide. The numbers since the early 2000s show that deaths from that disease have been cut in half—without introducing a new vaccine. If bed nets can do that, imagine what a new vaccine will do.

The results from the Gates foundation have been so impressive that Warren Buffet has placed a major amount of his wealth with them—and remember that Buffet is a results based value investor.

So, while I will probably continue to disagree with a lot of the Gates’ political beliefs, I am always impressed by someone who takes common sense and applies it to solving problems which affect major portions of the world.

And I will continue to admire smart people who don’t always see the government or the establishment NGOs as the ultimate way to achieve progress.

What we can hope is that other people who have accumulated major wealth by being intelligent investors will do what Bill and Melinda Gates have done.

Intelligent, results based investing, works in philanthropy, too. The guy who founded Microsoft has done a great job proving that.