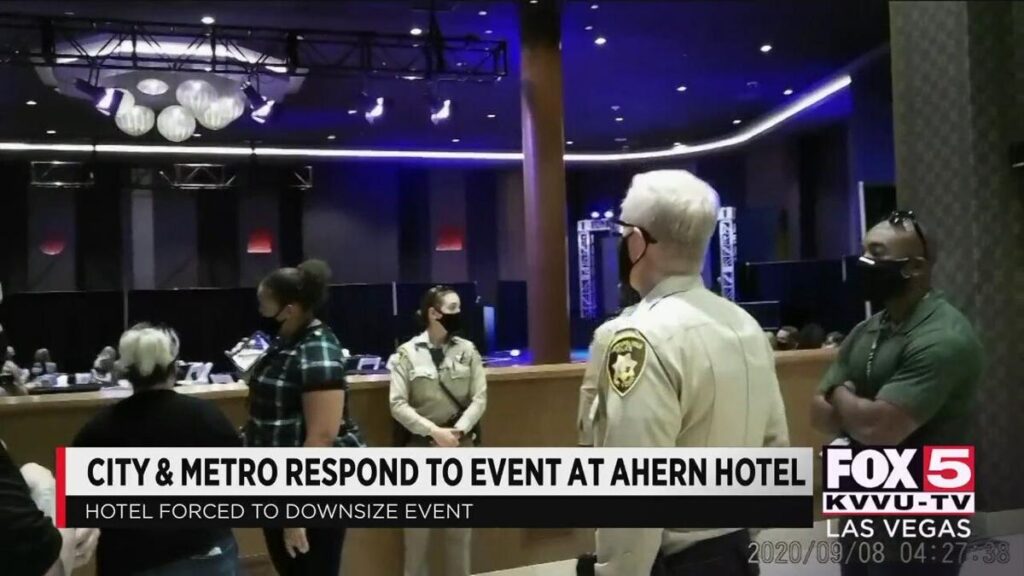 On one hand, the governor’s executive order states that there shall be no gatherings of 50 or more people.

On the other hand, that same order allows for businesses such as casinos and restaurants to service more than 50 people as long as the size doesn’t exceed 50% of the normal occupancy limit.

So let’s say a restaurant can hold 200 people.  Under the governor’s order you can serve up to 100 diners; well over the 50-person gathering limit.

If you think that makes absolutely no sense, you’re right.

Especially when the governor specifically limits church gatherings to 50 people REGARDLESS of occupancy limits.  Indeed, if a church can hold 800 people, von Sisolak still says they can only allow 50 people in the door on Sunday mornings.

The ballroom at The Ahern can hold up to 1,600 people.  As such, and under the governor’s imperial diktat, it can host up to 800 people, right?

(If you went to public school and can’t do the math, just trust me, OK?)

And for the past couple of months they’ve hosted a number of events, including the Nevada Republican Club’s monthly luncheons and the Clark County Republican Party’s convention and annual Lincoln Day Dinner.

And all the usual precautions have been taken.  Attendees must wear a face mask, are encouraged to socially distance when not seated and are bathed in hand-sanitizer.

And all was fine until last week when a politically incorrect gathering convened at The Ahern: A group of evangelical leaders holding a pro-Trump rally!

While Gov. von Sisolak has turned a blind eye to Black Lies Matter protests/riots/looting – including the shooting of a police officer in the head – he got his tighty-whities all up on a bunch over this one.

“I was deeply disheartened and dismayed to see the callous and dangerous behavior displayed last night in Las Vegas at a campaign event for President Trump.  I am equally dismayed that the campaign and business defied the State of Nevada emergency directive which limits public gatherings to 50 people or fewer.

“Our State & local govt’s are focused on mitigation efforts to reduce the spread of #COVID19, particularly in Southern Nevada, where there’s been a resurgence of the virus, & they are trying to balance keeping businesses open, our citizens at work & combating the spread.

“Our efforts include heeding the warnings of the President’s Coronavirus Task Force, which has identified Las Vegas as a Red Zone. President Trump’s Task Force echoes the directives we have in place, such as limiting gatherings, mask wearing and social distancing.

“Yet, President Trump’s own campaign has ignored his experts and state law.  This campaign event put more people at risk, including his supporters and the hardworking Nevadans who staffed the event.”

Funny, but I don’t recall the governor issuing such a scathing condemnation of the Black Lies Matter protests.

So violent roving bands of thousands of looters and rioters are OK…but not a peaceful rally of 550 people of faith in a ballroom that holds 1,600 in support of our President.

In any event, the City of Las Vegas issued a citation and $250 fine to The Ahern.

In addition, the city shut down a Mrs. Nevada-America Pageant event at the hotel this past weekend even though there were fewer than 200 people in attendance.

But Don Ahern, owner of the hotel, ain’t backin’ down.

He has a team of lawyers working ‘round the clock to fight these discriminatory and nonsensical orders, citations and fines and is continuing to book future events.

If only we could extract some of whatever SISOLAK-19 anti-bodies he has in his bloodstream and inject them into the spines of our elected Republicans!

Except this one.  She doesn’t need it…

This is absurd, insulting and deeply offensive.

Our current state Attorney General is black.  The 4th Congressional District representative is black.  The Speaker of the State Assembly is black.  The former State Senate Majority Leader – who was forced to resign last year in mid-session because he, um, had to go to jail – is black.

As are numerous state and local elected officials.

Playing the race card and bending a knee to the Black Lies Matter protesters/rioters/looters was just a cheap political stunt by Gov. Sisolak that did nothing but fan racial flames.

Other than sucking up to his base, it’s hard to understand why the governor would issue such a divisive executive proclamation.  But something tells me we haven’t heard the last of this.  I’m guessing money is somehow involved and/or the proclamation will be used to extend or expand the authoritarian governor’s already unchecked powers.

In response, District 19 Assemblywoman-elect Annie Black (disclaimer, a client) has published her own online proclamation declaring the Sisolak administration to be plagued with “systemic incompetence” resulting in an “economic health crisis.”

As such, she’s called on the governor to resign and let someone else take a turn at the rudder and try to steer our ship of state off the rocks Capt. von Sisolak has crashed us into.

Annie’s accepting signatures on her “People’s Proclamation” until close-of-business tomorrow, and will mail a hard copy with everyone’s name on it to the governor on Monday.

And spread the word through your own social media networks.  There’s strength in numbers!

* Daily Reminder: Gov. Sisolak and the Democrats made this economic mess in Nevada; they need to clean it up.  WITHOUT any federal bailout.  That means layoffs of non-essential government employees.  Now.

* How bad was the Biden campaign’s rollout of Kamala Harris as the Democrats’ vice-presidential nominee yesterday?  Most of the attention was over how to properly pronounce her first name.  It’s “Kama…” like “commie,” not “Kama…” like “camouflage.”

* The 80th Annual Sturgis Motorcycle Rally in South Dakota – with an estimated 250,000 enthusiasts in attendance – went on this week with nary a hitch.

Then again, South Dakota has a competent governor, Kristi Noem, who has demonstrated true leadership over the COVID-19 crisis; no stay-at-home or mandatory face mask orders.

If only Nevada had a competent governor.  Maybe we wouldn’t have lost the CES convention.

* An alleged illegal prostitute allegedly ripped off a tourist in Las Vegas to the tune of $90,000 in cash he had set aside to buy a house in Arizona.

It’s not known if she was following Gov. Sisolak’s mandatory mask order during the rendezvous.  If not, she could be in BIG trouble!

I’ll just point out that this sort of thing doesn’t happen in Nevada’s LEGAL brothels…which are banned in Las Vegas.

“Gov. Steve Sisolak has bestowed kingly powers upon himself because he thinks the coronavirus requires acting like your parent. … He’s making decisions that he has no business making.  He’s acting like the parent of a 3-year-old, instead of the governor of 3 million people … Sisolak also has amassed powers for himself that would make a petty tyrant blush. … Making it worse is that Sisolak seems like he’s making it up as he goes along.” – Columnist Victor Joecks