One early morning in the Spring of 1966, Ronald Reagan walked out the front door of his home at 1669 San Onofre Drive in Pacific Palisades. Wearing pajamas, bathrobe and shaving cream on his half-shaved face his purpose was to find the morning paper. He also found a young fan who became a lifelong friend, supporter and co-worker – Dana Rohrabacher. 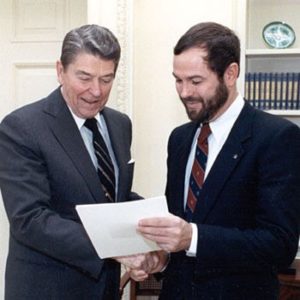 Dana had spent most of the night camped out on Reagan’s front lawn, determined to save the newly formed “Youth for Reagan.” The gray beards in the gubernatorial campaign had determined that having an official youth arm would be too much trouble and ordered it disbanded. Rohrabacher, then chairman of Los Angeles Harbor College Young Americans for Freedom (YAF), was determined to save it.

Happily, Reagan was chairman of the California YAF Advisory Board, knew of the effective campus activism of its members and agreed with Dana that an energized youth arm would be an asset to his campaign. A few days later the campaign’s elders mysteriously changed their mind and reinstated the youth operation – staffed mainly by YAF members and serving as a huge recruiting tool for YAF throughout the campaign.

This was just the first of many times through the years that the Reagan-Rohrabacher collaboration worked together to accomplish good things. From Dana’s work in the ’76 and ’80 presidential campaigns to his seven years as a Special Assistant and speech writer in the Reagan White House to his clandestine trip to Afghanistan to help the anti-communist Mujahedeen to his career as one of the most reliably conservative, Reaganesque members of Congress it has always been clear that Dana and the Gipper had the equivalent of the Vulcan mind meld.

This has not gone un-noticed by friend or foe. Dana’s political profile – among other things lifetime ratings of 95% from the American Conservative Union, 97% from the National Tax Limitation Committee and A+ from the NRA – has long put him at the top of the Left’s enemies list. This year, energized by the “resistance” movement and funded by admitted former Nazi George Soros, the far left sees its chance to get revenge. Soros is spending millions of dollars in California to elect candidates who will implement his far-left ideas.

Concentrating on congressional and district attorney races, Soros is replacing the Left’s pink “pussy hats” with his green financial resources. Laundering money through various front groups and PACs he has helped target congressional seats in Orange County currently held by conservatives. Taking down Dana is at the top of the Left’s wish list.

Sadly it is also at the top of the wish lists of some Never Trump die-hards and a political huckster named Scott Baugh. As I wrote previously, Baugh is a former legislator, former lobbyist and full time self-promoter. He doesn’t talk much about his legislative career, and with good reason. The two “achievements” that stand out are his vote in favor of giving illegal aliens “in state” tuition to the U.C. System and twisting arms in the Assembly so other Republicans would join him in supporting the disastrous 1999 “pension spiking” legislation. That bill today is bankrupting cities and has left the state with hundreds of billions of dollars in unfunded pension liabilities. Thanks, Scott.

Neither does he talk about his public promises of two years not to run against Dana and to refund contributor’s already-given contributions. He has done neither, so on top of everything else, Baugh is also a liar. We have enough of his kind of creature in the D.C. swamp already.

Unable to talk about his own record, his campaign against Rohrabacher has been scurrilous, duplicitous and truth challenged. Given Baugh’s refusal to be photographed with President Trump during a recent presidential Orange County visit, it is not surprising that his campaign is receiving support from local “Never Trump” bitter-enders. These folks thought the country would be better off with Hillary Clinton as president. They now think the country would be better off with Scott Baugh in Congress. As John Wayne said, “Life is hard. It’s even harder when you’re stupid.”

Baugh’s main critique of Dana is that he hasn’t passed enough bills during his time in Congress. Baugh may not know that when Obama left office there were 95,894 pages in the Federal Registrar. Because of President Trump’s regulation cutting and Dana Rohrabacher’s refusal to add new laws solely for the purpose of “doing something,” the number of pages has been reduced to a mere 61,950. Baugh thinks it’s the duty of congressmen to endlessly add more pages. Donald Trump add Dana Rohrabacher think 61,950 is still too many, but at least headed in the right direction.

Unlike Baugh, President Trump and Rohrabacher agree with Barry Goldwater, who in “Conscience of a Conservative” wrote: “I have little interest in streamlining government or in making it more efficient, for I mean to reduce its size. I do not undertake to promote welfare, for I propose to extend freedom. My aim is not to pass laws, but to repeal them. It is not to inaugurate new programs, but to cancel old ones that do violence to the Constitution, or that have failed their purpose, or that impose on the people an unwarranted financial burden. I will not attempt to discover whether legislation is ‘needed’ before I have first determined whether it is constitutionally permissible. And if I should later be attacked for neglecting my constituents’ ‘interests,’ I shall reply that I was informed that their main interest is liberty and that in that cause I am doing the very best I can.” Someone needs to send Baugh a copy of “Conscience” and explain that passing more laws is in neither the conscience nor definition of a conservative.

A common question about Baugh’s campaign is “why now?” It is widely believed that this will be Dana’s final re-election. His service to the conservative movement, the Republican Party and the country have more than earned him the right to retire on his own timetable. Millions of dollars will be spent in this race that could have been saved for the November battles against the Democrats. Why? GOP activists have been divided. Why? Why can’t Baugh do the decent, honorable thing and wait until 2020?

Because of a diminutive, conservative tiger named Michelle Park Steel. A member of the Orange County Board of Supervisors and Korean by birth, Steel is wildly popular with both the GOP rank and file and the county’s Asian community – which just happens to be the fastest growing demographic group.

She has become a major leader in the statewide pushback against the insane “sanctuary” state and city laws. There are now 40 cities and 10 counties officially resisting the state’s “all criminal illegals welcome” sanctuary policy. She was at the White House last week meeting with President Trump and Attorney General Sessions to brief them on the burgeoning anti-sanctuary movement she is helping to empower.

Steel would obliterate Baugh in a 2020 primary election, and that is why he cannot do what even he and his most fervid supporters must know in their heart of hearts is the right thing – wait for two years. Personal ambition apparently trumps all in Baugh-world.

Dana’s and my mutual friend Ed Meese is likely the proper owner of the “last Reaganite” title, but Dana can easily claim it for members of Congress. From the half-shaven candidate meeting the teen-aged acolyte on the front lawn grew a lifelong association that spanned decades – on the campaign trail, in the White House, on Air Force One, at State of the Union speeches and so much more.

I know these are memories Dana cherishes, as the last Reaganite fights on. He is in a two-front war against the Soros-funded “resistance” and the blind ambition of a conservative poseur with a campaign fueled by Republicans who still hate President Trump. Orange county was pivotal in launching Ronald Reagan’s political career. County voters who want to win one more for the Gipper have an opportunity to do so – by re-electing Dana Rohrabacher.