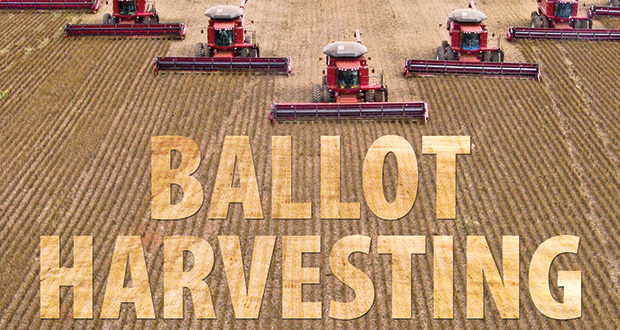 (Chuck Muth) – Former Nevada U.S. Sen. Dean “Never Trump” Heller is continuing efforts to resurrect his political corpse – with an eye on the governor’s mansion in 2022 – by throwing another Republican under the bus.

From a report by Riley Snyder…

“Heller, speaking with reporters during a Wednesday call arranged by the Trump presidential campaign, said he has spoken with Secretary of State Barbara Cegavske in recent days but remained concerned that she was not raising more of an alarm over the changes – including a process known as ‘ballot harvesting,’ or ballot collection by non-family members – set for the 2020 election.

“’We have a Secretary of State that is not making noise on this,’ Heller, who is also a Republican, said. ‘She should be standing on that soapbox, really being as loud as she can, because there is nothing more important to our democracy than the safety and security of that ballot, and that’s not going to occur in this election cycle.’”

As a former secretary of state himself (remember in 1998 when then-SoS Heller short-circuited the recount of the John Ensign/Harry Reid U.S. Senate race that Reid “won” by 428 votes?), Heller should know the Legislature passes election laws and the SoS implements them.

And the fact is, like it or not, the Nevada Legislature, in a Special Session two weeks ago, officially changed the law governing November’s general election.  As such, the SoS has no choice but to oversee the election based on the law as it now exists, not as it previously existed.

That said, Heller’s attack on and criticism of Cegavske is pure sheep dip.

For the record, I immediately hopped up on my own soapbox and opposed the decision to switch Nevada’s June primary to an all-mail election.  So I’m no knee-jerk, partisan defender of Secretary Cegavske in this matter.

But where was Heller when that decision was made last March?  He sure as hell wasn’t standing up on any soapbox bitchin’ about it.  Instead, the sound of silence.

And he knew for weeks after the primary that Democrats were going to try and change the law in a special session to force another vote-by-mail election in the general.  But again, Heller didn’t say a peep about it.

Then the bill (AB4), with no notice to or consultation with the Secretary of State’s office, was formally introduced.

Did Heller hop up on his soapbox and testify against it?  Heller no.  Total mute.  Cat had his tongue.  He just sat up in the peanut gallery and watched it happen.

But now that the Legislature has officially changed the law, NOW he wants to bloviate – and stick a knife in Cegavske’s back in the process – when the horses are already out of the barn.

Talk about a jonny-come-lately cheap shot.

The fact is, while Heller was sitting on the sidelines enjoying his brie and chardonnay, Secretary Cegavske and her aide-de-camp, Deputy Secretary of State Wayne Thorley, were in the trenches slugging it out.

Instead of whining and kvetching to reporters after the fact, Secretary Cegavske wrote an extensive op-ed that was published on July 29 titled, “Nevada’s voting laws do not need to be changed.”

“Though I have repeatedly said for months that the 2020 general election would not be an all-mail election like the primary election, partisan activists on the left have recently criticized me for not automatically mailing all registered voters a ballot for the general election.”

“Another common argument in support of conducting an all-mail election for the November general election is that voters should not have to choose between voting and their health. This is a false choice that reveals an elementary misunderstanding of Nevada’s election laws. … Any registered voter in the state can request and vote with an absentee ballot. A valid excuse or reason is not required. The act of casting an absentee ballot is also easy.”

“Automatically mailing all registered voters in Nevada a ballot for the general election would be extremely costly. The printing and outbound postage costs alone would be over $2 million. Additional costs for equipment and voter education would push the total bill to between $4 and $5 million. Automatically mailing each registered voter a ballot would also represent a waste for the hundreds of thousands of voters who will vote in person and not use the ballot that was mailed to them.”

“We do not have to mail all registered voters a ballot to provide voting choices and ensure voters’ safety. We can simply rely on the laws already on the books.”

What part of that does Mr. Heller believe isn’t “standing on a soapbox” and “making noise about this”?

And where was Mr. Heller’s op-ed opposing the Democrats’ changes to election law?

In addition, Secretary Cegavske and Mr. Thorley testified extensively at the hearing on AB4 in the Assembly on July 31st.  On the Democrats’ vote-by-mail election changes, Mr. Thorley stated, in no uncertain terms…

“Automatically mailing every active registered voter is costly and not needed to ensure voter safety.”

At the same hearing, Secretary Cegavske was asked about the then-existing prohibition on “ballot harvesting” that Democrats proposed to repeal….

“(The prohibition) is a safeguard that our state, I believe, we need.  There are reasons why it was put in. I feel taking that out would be devasting to our state.”

Can’t be any clearer than that.  And it was communicated from her official soapbox before the official body with the authority to make the changes.

In an August 5 follow-up interview with Michelle Rindels, Mr. Thorley was asked about ballot harvesting; “people going maybe into nursing homes or just any sort of group setting, collecting everybody’s ballots and maybe changing the vote for them or potentially discarding the ballots.”

“So we’re concerned about this. The secretary of state was opposed to this bill and this provision specifically in the bill. We think it’s a step too far. If there were concerns about access to voting with the old restrictions, we were certainly happy to have a discussion about expanding the list of people eligible to return a ballot on behalf of the voter. But the blanket removal of that prohibition and allowing anybody to return a ballot on behalf of the voters is concerning to us.

“We think that it will increase voter intimidation. Some voters don’t want to vote and that’s their right. They may want to vote and return their ballot themselves. We think we’ll see instances of people just going door to door and chasing ballots. That’s what we’ve seen in other states.

“And there’s even avenues for nefarious activity like we saw in North Carolina in 2018 where a political operative was harvesting ballots and, in some cases, opening those ballots changing the votes that the voter had voted. So it’s a concern, something we’re going to keep an eye out for.”

Mr. Thorley was also asked about the cost to automatically mail every active voter a vote-by-mail ballot.  His response…

“It will be more expensive. The cost was one of the main reasons the Secretary of State was opposed to the bill.”

Again, what part of all this does Mr. Heller believe isn’t “standing on a soapbox” and “making noise about” it?

And why didn’t Mr. Heller testify against the bill – the way Secretary Cegavske and Deputy Secretary Thorley did – when he had the chance?

Let’s wrap up with this…

But as detailed above, she already has.  So the effort is misdirected.

The Legislature, over the Secretary of State’s opposition, passed the automatic vote-by-mail/ballot-harvesting election changes.  So unless a lawsuit challenging them is successful, there isn’t anything the SoS can do to nullify them.

Two days ago, Secretary Cegavske submitted an “emergency regulation” for approval by Gov. Sisolak “that would require any person who returns 10 or more ballots at the direction of other voters to report to the Secretary of State’s office and list any political, corporate or advocacy group with whom they are associated.”

“In approving Assembly Bill 4, the Legislature gave in to partisan interests and gutted an enduring state law that served to protect the integrity of elections.  Before Assembly Bill 4, engaging in ballot harvesting was punishable as a felony. The severity of the punishment associated with the act of ballot harvesting reflected the Legislature’s longstanding recognition of the threat associated with allowing third parties to handle ballots on behalf of voters.”

“As Secretary of State, I understand my role is to enforce the laws passed by the Legislature, and I will continue to perform my duty in this regard.  However, it is also my job to ensure elections are fair and that any illegal activity associated with an election can be detected and stopped.”

She added that the emergency regulation “is needed to ensure the Secretary of State has the information necessary to investigate and stop illegal activity associated with ballot harvesting.”

Again, what part of that does Mr. Heller believe isn’t “standing on a soapbox” and “making noise about this”?

And why hasn’t Mr. Heller spoken out in favor of this simple, common-sense effort to help assure the safety and security of the election under these new rules?

If people are concerned with the potential for voter fraud due to the vote-by-mail and ballot harvesting changes in state law, they should be calling the governor’s office and calling on him to approve Secretary Cegavske’s requested emergency regulation, not calling her office.

Once connected, rather than listening to all the options, just press “0.”  You probably won’t get a live person on the line – can’t have citizens actually talking to a human being in this administration! – but you can then leave a message.

As for Mr. Heller, maybe he should just stick to baling hay on his farm in forced retirement.  He’s done enough damage to the GOP and the state already.

“(Nevada) Secretary of State Barbara Cegavske, who opposed AB4 (the vote-by-mail/ballot-harvesting bill), noted that there were no complaints of fraud during the primary election.  But there was no one investigating fraud during the primary.  Our elections are so important that there is exactly one person on the staff whose job it is to investigate fraud.” – Hank Sikorski, Las Vegas Review-Journal, 8/8/20