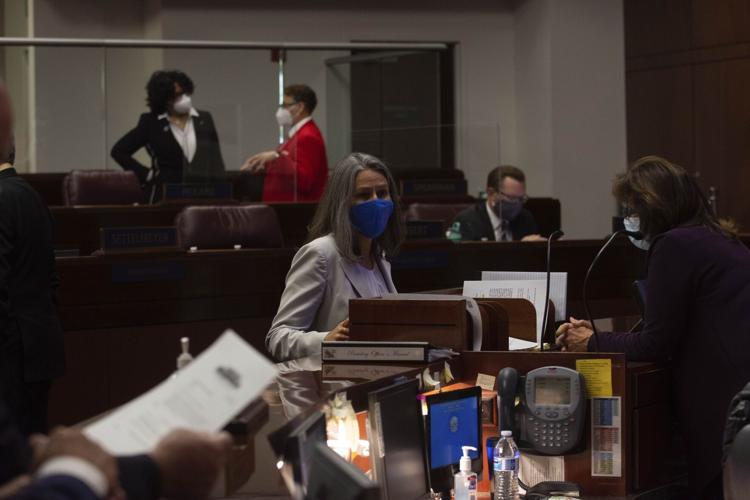 State Senator Julia Ratti speaks with Secretary of the Senate Claire Clift on Sunday, Aug. 2, 2020, during the third day of the 32nd Special Session of the Legislature in Carson City.
David Calvert / AP

(Kimberly James) – Rural counties and members of the Nevada mining community say proposals to increase taxes on the industry could cost the state thousands of good-paying jobs.

The way mines are taxed is set forth in the Nevada Constitution, but any one of the three proposed changes could modify that and cost jobs, according to the Sierra Nevada Ally.

Currently, the state and the county split net proceeds from the tax revenue. The tax rate applied to the net proceeds is between 2 percent and 5 percent. In rural counties like Humboldt, the tax revenue makes up a significant portion of the general fund.

AJR1 and SJR1 would eliminate the net proceeds minerals tax and therefore any benefit to the county. Instead, there would be a 7.75 percent tax on gross proceeds of all minerals. Funds would be directed to health care and education.

From the perspective of the mining industry, Tyre Gray, president of the Nevada Mining Association, both of these options would be damaging and would result in an estimated loss of 11,000 jobs and $900 million in salaries to the state.

“It is difficult to find any benefit to the state in a scenario that results in a 30 percent contraction of a valuable industry and the loss of thousands of the best-paying jobs in Nevada,” Gray told The Center Square.

Ken Tipton, chair of the Humboldt County Board of Commissioners, told The Center Square that he sees no benefits for the counties in either SJR1 or AJR1.

In a scenario where mines are taxed on gross revenue, Tipton said he sees a scenario where larger, profitable mines continue to operate for a while; corporations would probably close some of the mines that weren’t very profitable; and smaller mines would be at risk of closure. This would have repercussions for the whole county.

AJR2 would retain the net proceeds tax structure and continue to disburse allotments to counties. The tax rate on the proceeds would be raised to between 5 and 12 percent.

Even though it represents a 140 percent increase in net taxes to the industry, Gray said Nevada’s miners are neutral on AJR2.

“Just as the industry worked together with state leadership to prepay its net proceeds taxes to help Nevada meet a funding shortfall, we hope that continued demonstrations of goodwill on behalf of the industry will help us reach a reasonable and sustainable compromise that recognizes mining’s value and contributions to our state,” Gray said.

Tipton said Washoe County has the casinos and technology to rely on and Clark County has casinos and corporate banking to rely on, but for the time being, rural counties like Humboldt rely on mining.

“Mining helps keep us growing while we can look to our development authority and whatnot for new ways and new businesses and new things that can help us to continue to grow because we know that we won’t always have mining here,” Tipton said.