Emperor Sisolak to Rural Nevada: Up Yours!

Emperor Sisolak to Rural Nevada: Up Yours!
N&V Staff 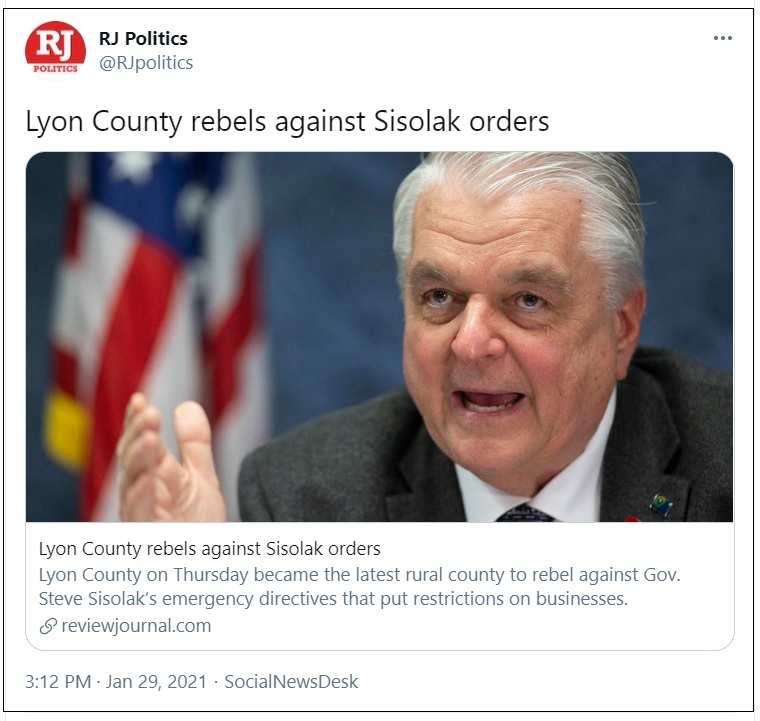 (Chuck Muth) – The worst beating you’re likely to get as a kid is when a bully tells you to do something, such as hand over your lunch money, and you reply, “No.”  Bullies will not tolerate being defied.

Which naturally brings us to Nevada Gov. Steve Sisolak.

On Thursday, the Lyon County Board of Commissioners bravely defied the Emperor by UNANIMOUSLY (5-0) passing Commissioner Ken Gray’s “Revolution Resolution” declaring that the governor has abused his authority in dealing with the CHINA-19 endemic.

The resolution went on to state that “all independently owned businesses are essential” and urged those in Lyon County to operate “within the Governor’s ‘emergency directives’ in good faith,” but allowed them “to determine how and if to implement those directives relative to their business model.”

And Sisolak sycophants had a cow (check your herd, Sen. Settelmeyer!).

The very next morning, the Emperor’s COVID Czar, Caleb Cage – who tells everyone else what to do to avoid the ‘rona while mysteriously having caught THE VID himself – had a meltdown on a media call.

He referred to the “economic emergency” resolutions that have been passed by four rural counties (what are the rest waiting for?) to be nothing but political posturing and declared them “not helpful for protecting the community health and economy throughout the state.”

What a load of sheep dip.

During his rant, Mr. Cage sweet-talked Lyon County Manager Jeff Page – a hired government bureaucrat, not an elected official – for being a “vocal advocate” of Emperor Sisolak’s “mitigation measures,” while simultaneously threatening legal action against the resolutions.

Around 3:00 pm on Friday, Mr. Page posted a “clarification” on Lyon County’s Facebook page – without approval by the five members of the Commission – declaring the Revolution Resolution doesn’t do what the resolution does.

“The passage of this resolution,” Mr. Page hunt-and-pecked, “does not authorize businesses or private citizens to cease following emergency directives in reference to COVID-19.”

Are those your kneecaps, commissioners?  Here, let me whack them with this baseball bat.

Cage & Page – Sisolak’s “Cagney & Lacey” COVID cops – conveniently overlook the absolute stupidity of some, if not most, of the Emperor’s Directives.  For example…

Why should a Lyon County breakfast diner be forced to only allow in customers who have a reservation?  Does COVID fly around the air, waiting only to infect those who don’t call ahead?

And why can airplanes fill every single seat in every single row – including those hated middle seats – while restaurants, bars and other businesses can only operate at 25% capacity?

And why should Nevada’s rural counties – which don’t have anywhere near the problems Clark and Washoe counties have – be treated like ugly step-children with one-size-fits all dictatorial Directives?

Didn’t matter to Cage & Page.  All they knew was that the Emperor was royally pissed at the defiance.  So they dropped the hammer and threw the ELECTED officials in Nevada’s rural counties under the bus.

But even that wasn’t good enough for our thin-skinned, red-faced governor who had steam coming out of his ears.

“We believe resolutions like those passed in some of the rural counties are counterproductive and confusing to Nevadans,” the Undynamic Duo declared.

No, they’re not.  Everybody understands EXACTLY what’s going on.

What’s confusing is how forcing people to wear a mask while driving alone in their car or taking their dog for a walk with no one else within a country mile makes any kind of “scientific” sense.

What’s confusing is why casinos can pack thousands of Californians around slot machines but Nevada families can’t celebrate birthday parties in their own home with more than 10 people.

So, up yours, rural Nevada!

Ridiculously, Gov. Laurel and AG Hardy scolded the counties’ ELECTED officials for supposedly encouraging their constituents “to ignore Directives that have issued upon the advice of medical professionals to keep people safe.”

Really?  Please give us the names of the “medical professionals” who have advised that only people who eat in a restaurant with a reservation are safe.  We’ll wait.

As the Iron Lady, late British Prime Minister Margaret Thatcher, once advised President George Bush, “Now is not the time to go wobbly.”

Bravo to the ELECTED county officials who, in the great American spirit of our Founding Fathers, have dared to tell our Emperor to stick his Directives where the sun don’t shine.

As for Mr. Page and his Brutus-like stabbing in the back of his five bosses and the citizens of Lyon County he works for, now might be a good time to start dusting off that resume.

Condolences may be sent to giamuth@icloud.com.

“Law is often but the tyrant’s will, and always so when it violates the rights of the individual.” – Thomas Jefferson

“There is danger from all men. The only maxim of a free government ought to be to trust no man living with power to endanger the public liberty.” – John Adams

“Society in every state is a blessing, but government even in its best state, is but a necessary evil; in its worst state, an intolerable one.” – Thomas Paine

“The spirit of resistance to government is so valuable on certain occasions, that I wish it to be always kept alive. … I like a little rebellion now and then. It is like a storm in the atmosphere.” – Thomas Jefferson

“A government is like fire, a handy servant, but a dangerous master.” – George Washington

“Our rulers can have authority over such natural rights only as we have submitted to them.” – Thomas Jefferson

“Those that can give up essential liberty to gain a little temporary safety deserve neither liberty nor safety.” – Ben Franklin

“If ye love the tranquility of servitude better than the animating contest of freedom, go home from us in peace. … Crouch down and lick the hands which feed you. May your chains set lightly upon you, and may posterity forget that you were our countrymen.” – Samuel Adams