For Love of the Game: The Best Sports Film Ever
Ron Knecht 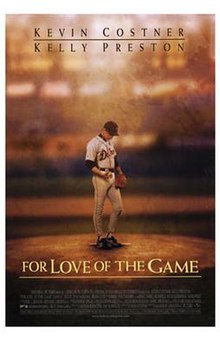 Everything about this year has been weird.  Maybe you can restore some normalcy by watching the best sports film ever, one that goes with the end of the regular season: For Love of the Game.

Kathy, Karyn and I watched it again recently.  Not only was it better than ever, but I saw more nuances, themes and rich details than ever.  I’ve long said it’s the best sports film ever, but also as good a love story as you’ll see.  Although the two main stories are as tightly intertwined as can be, this time I noticed that the love story takes up more screen time and the film develops and resolves a remarkable number of dramatic relationship stories for its hero.

Kevin Costner plays Billy Chapel, the 40-year-old golden boy who for 19 years has been the ace starting pitcher for the Detroit Tigers.  He grew up in Michigan, with ideal parents including a dad who loved baseball and his wife.  Billy, taught character and baseball by dad, starred at the U of M after a great little league and high school career.  The early vignettes sketch all that perfectly.

The Tigers owner promised the family he’d watch over young Billy, who soon became the hero of the 1984 World Series.  With a storybook career, including over 300 wins, Billy’s a cinch for the Hall of Fame.  This year, however, the team is mired deep in the standings as they head to New York for two final games against the despised Yankees.

The Bronx Bombers are in a tight race with the Red Sox for the pennant, and the manager decides to start Chapel, even at the end of his worst year with an 8-11 record.  A weary Billy agrees despite the objections of his catcher and best friend Gus: the Tigers owe it to the BoSox not to just lay down.

The love story began five years ago when the Tigers were in NY and Billy stopped to help damsel-in-distress writer Jane Aubrey, whose rental car had broken down.  She had never seen a baseball game, and he ends up taking her with him to see him win the game and then to dinner.  Their chemistry blossoms into a romance and they get together when he’s in the Big Apple.

As long-term, long-distance relationships are wont to do, theirs has ups and downs.  But as he gets to know Jane and her teenage daughter Heather, they begin to become a family.  Much to everyone’s pleasant surprise.

Then during the winter before this season, Billy has a catastrophic accident on his pitching hand that threatens to end his career.  This upsets his relationship with Jane and nearly everyone else.  He recovers and struggles through the season.

But for this game Jane fails to meet him for dinner the night before the game, he gets drunk and oversleeps.  They talk before he heads for Yankee Stadium an hour late, and she tells him she’s moving to London for a job.  Ironically, he’s throwing his best stuff as he starts the game thinking only about their relationship.  Until the eighth inning, he has no idea he’s working on that greatest rarity in baseball, a perfect game.

The game features two of the most heart-warming what-goes-around-comes-around episodes ever between and Billy and Gus and Billy and outfielder Mickey Hart.  Also a deep friendship with the Yankees’ star slugger, his other best friend, as well as perfectly scripted baseball and dramatic events.

Deep in the game, Billy’s injury flares up, threatening to end his evening.  Even though he’s decided to retire, he has to play through the pain to the end.

Perhaps the neatest thing, though, is that the game is called by Vin Scully himself, the best announcer ever, with anecdotes only he could provide.  “Tonight, he’s pitching against time, against the future, against age, against ending. …  Tonight he will make the fateful walk to the loneliest spot in the world, the pitching mound in Yankee Stadium to push the sun back up in the sky and give us one more day of summer.”

But the love story has the final words: