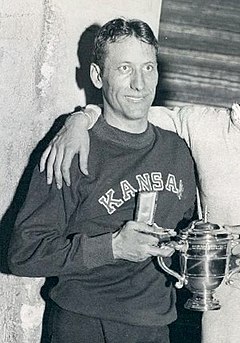 To join the moment I need to write an upbeat and hopeful column before those things again turn south and some others join them.  For the occasion, I’ve chosen the story of a Kansas farm boy whose athletic career peaked in the 1930s.   After his triumph and fame, his noble service to many children, he became even more famous and beloved.

Of course, being the best middle-distance runner in the world, he ran in the 1932 and 1936 Olympics in the 1,500-meter run, which is roughly 100 meters short of a mile, taking fourth and second respectively.    He was also voted the “Most Popular Athlete” by his fellow American Olympians.  In 1933, he also won the prestigious Sullivan medal.  And the mile run at the annual Kansas Relays is named for him.

In those days, the four-minute mile was the goal of all serious middle-distance runners, even though it would not be broken until May 6, 1954.  It was, of course, catnip to Cunningham.  Concerned that a strong start might damage his lower legs, he always stayed in the pack through the first half of a race and then drove hard to the finish line, sometimes at a near sprint over the last hundred yards.

I’ve now gone half a column telling you about his athletic prowess and not mentioned the real reason he is so revered and honored – the best part of this story.  Born in 1909 in the small town of Atlanta, KS, and raised nearby in another small town, Elkhart, he and his brother always got to the one-room school house early when the weather was cold.  This allowed them to start the fire in the furnace so the building was comfortable when others arrived.

One day, unknown to the brothers, the can with fuel wrongly included gasoline, not the kerosene they usually used.  When Glenn spread the gasoline over the wood for the fire and lit it, the result was an unexpected explosion that engulfed the school house and brother.  His brother soon died of his burns, but the arriving students dragged Glenn out of the fire.  He was burned severely from his waste down and mostly to the bone below his knees.

At the hospital, he overheard a doctor telling his mother he was unlikely to live.  He fought a grim and determined fight and survived.  Later he heard the doctor tell his mother she should have his legs amputated because he’d never walk.

He resisted fiercely and his mother relented.  He had two things going for him.  One was a new type of therapy he practiced assiduously.  The other was his positive attitude and strong religious faith.  They combined in bible verse Isaiah 40:31: “But those who wait on the Lord shall renew their strength; they shall mount up with wings like eagles, they shall run and not be weary, they shall walk and not faint.”

The most important thing, though, is that he and his wife operated the Glenn Cunningham Youth Ranch in Kansas.  There, they raised more than 10,000 orphans and other needy and abused children until he died in 1988.

Ron Knecht has served Nevadans as state controller, a higher education regent, an economist, college teacher and legislator.  Contact him at RonKnecht@aol.com.