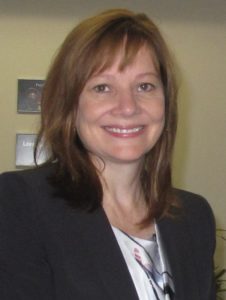 General Motors’ CEO Mary Barra doesn’t have a tin ear.  Her ears must be made of stainless steel.

Just 10 years after being bailed out by…wait for it…us, the taxpayers, and riding immense profitability, she is hatching a plan which would shutter an Ohio plant and lay off some of the bluest of blue collar workers because she says she wants to secure the future of GM before the next downturn.

And also, because American consumers prefer Chevy and GMC trucks to cars in this day and age.

Ford simply stopped making what’s not selling and ramped up production of what consumers want.

But then, Ford never needed nor asked for the largesse of the taxpayers ten years ago.  In fact, Ford’s current advertising campaign subtly understates the actual truth.  Not only has the company been making cars and trucks for 115 years—which is the theme of the campaign—but what’s left unsaid is that it has also never gone bankrupt.

General Motors, on the other hand, acts like a regulated public utility when it suits them and like an independent corporation when it walks into the next room.

It also makes a lot of money making cars in China and just hates the idea of the President using tariffs as a tool to bring the Chinese trade practices into line with what we consider a fair deal for America.

Now, while it is true that a corporation is solely about money for its shareholders GM is a special case.  Back in 2008 and 2009, George W. Bush made a huge financial mistake in using government money to bail out GM and Barack Obama compounded it.  They listened to Goldman Sachs which was busy betting against the securitized mortgages they underwrote because that’s what large investment banks do.

The truth is, GM should have been forced to liquidate—not reorganize—under the bankruptcy code.  There would have been plenty of buyers and factories would have stayed open under new management.

So President Trump is faced with a multiplicity of problems stemming from a horrendous decision by his predecessors which was politically expedient but a financial disaster to the folks who were left holding the bag.  We, the taxpayers.

It’s time to correct those mistakes.

His tariff gambit is bringing China in line.

To listen to the overpaid pundits on Fox Business and CNBC and, yes, the Wall Street Journal—most of whom have never actually done anything but sign the backs of their rather large paychecks—we should just calmly walk away from China screwing us and let GM continue to screw us.

Sometimes you just have to say no and see what happens.

We are China’s largest market.

The biggest argument the business pundits have is that America will not be able to buy cheap Chinese crap at WalMart.  BooHoo.

If we keep on going in the direction we have been headed since the Clinton administration, the middle class’s dollars will be so worthless that we won’t be able to buy an iPhone without the pickup truck to carry the money.

The fake news media would have you believe we should always lose a trade war.  The truth is that the President is right.

America first and we should always win.  Further, we should never, ever feel any guilt about winning.  This is the greatest nation ever seen on this planet and if we were to fail, think about what it would mean for the rest of the world.