GOP fast track to the minority 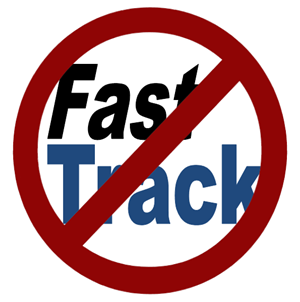 (Robert Romano for NetRightDaily.com) – Trade promotion authority for the president to negotiate commercial treaties — which pass with simple majority votes in both chambers of Congress — has lapsed since 2007, when Democrats had majorities.

Once Barack Obama became president, Democrats never granted him trade authority. They could have. But they never did.

Now, suddenly, with Republicans in the Senate majority, Senate Democrats are more than willing to provide just enough votes — mostly from seats that they are in little danger of losing over the issue — to allow trade authority to negotiate the Trans-Pacific Partnership to come to the floor and pass. Why?

Because, as Americans for Limited Government President Rick Manning explained in a statement, “These votes risk Senate Republican seats in Ohio, Illinois, Indiana, New Hampshire, Pennsylvania, and Wisconsin to name just a few, putting the Senate majority in real jeopardy in 2016.”

You read that right. Republican Rust Belt and other vulnerable seats are coming up in the upcoming presidential cycle — and the Pacific trade deal puts a ripe target on all of their backsides. And with a slim four-seat majority, the GOP’s margin for error is practically zero.

In other words, it’s a trap, and Republican senators — on the mistaken fallacy that they are voting to grant trade authority to the incoming Republican president in 2017 — are walking into it willingly.

For starters, how do Republicans intend on winning the White House in 2016 without Ohio?

And, what sort of Senate majority do they expect to have in 2017 when they are now ordering their most vulnerable members to the floor to set themselves on fire over an issue a significant percentage of their constituents abhor?

A recent poll by Democracy for America found two-thirds of voters less likely to reelect Sen. Rob Portman (R-Ohio) if he comes out in favor of trade promotion authority and the Trans-Pacific Partnership.

This is a political suicide pact, with members signing up to be targeted by labor unions who undoubtedly will be looking for blood should the Trans-Pacific Partnership go through.

Which, guess who controls the timing of when the actual trade agreement comes to the floor?

That’s right. President Obama. Once the Pacific trade deal is through being negotiated, it can come to the floor of the Senate as soon as 60 days afterward. And Republicans will be anxious to enact it prior to 2017.

So, what will Obama do? Ensure that it comes to the floor in the heart of the election campaign, to make the vote as painful as possible — for Republicans, who will be clinging to a Senate majority.

Meanwhile, the only true constituency for the Trans-Pacific Partnership resides not in the heartland, but on K Street, Wall Street, and Silicon Valley. Does anyone think they care if Republicans keep a Senate majority?

Who knows? Maybe Republican senators don’t even care if they keep a Senate majority.

Even Democrats’ token opposition to trade authority just days ago — to fight for “enforceable” currency provisions in the agreement don’t you know — was that much more of a ploy.

First, to shore up their political base, which hates the treaty and is suspicious of global trade, by pretending to fight for working Americans.

And second, to unite Republicans in support of the treaty — giving them ownership of the hot potato, which they now have full title to.

That is, unless senators like Rob Portman of Ohio, Ron Johnson of Wisconsin, Kelly Ayotte of New Hampshire, and Richard Shelby of Alabama stop it — while they still have a chance.

Otherwise, the only fast track being voted on may very well be a Republican fast track to the Senate minority in 2016.