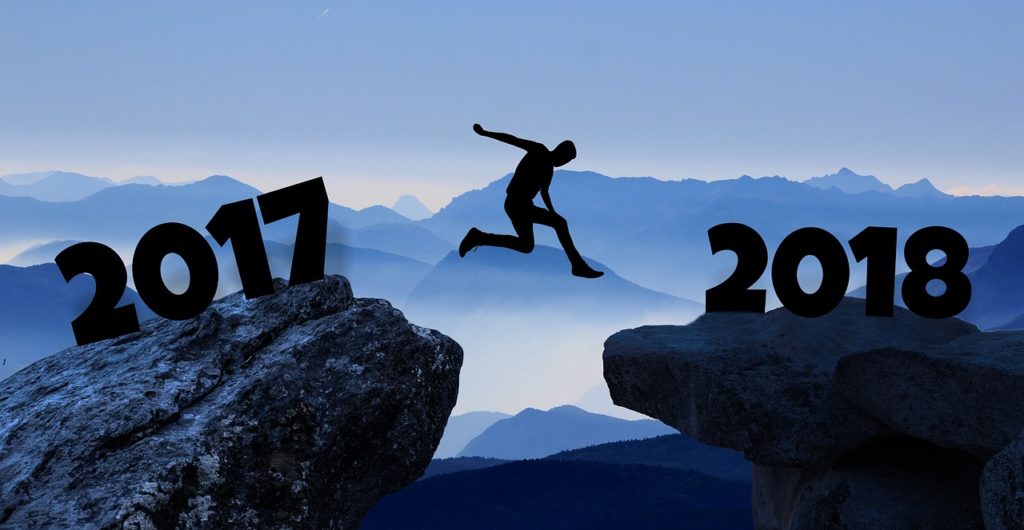 As we get ready to ring in 2018 and say goodbye to 2017, we want to reflect briefly on the history of the New Year celebration and amuse you with some fun historical facts.

One of the most notable celebrations is that in Times Square in Manhattan.  This has been an annual event in New York since 1907.

Nearly every television station will broadcast the “ball drop” in Times Square: A large, lighted crystal ball sliding down a 77-foot pole over the course of the last minute of the year.  When the ball reaches the bottom, it is the New Year.

Hundreds of thousands of people make the trek to New York each year for this happening.  It is the signature event of the New Year’s Eve celebration in the United States, and it is broadcast throughout the country and the world.

But how did this celebration originate?

According to a PBS article from December 30, 2013, the lighted crystal ball was the reaction to New York City banning fireworks as a public New Year’s display.  Prior to 1904, the celebration in New York City was at the Trinity Church, with church bells ringing and fellowship.  In 1904, the celebration moved north to the New York Times building.  Fireworks were added to draw more people.

However, this celebration proved problematic with hot ashes dropping on the streets.  Hence, the fireworks ban and the need for a new focal point for the celebration at the Times building.

From the PBS article, “(New York Times publisher and owner Adolph) Ochs commissioned the Artkraft Strauss sign company to create a 700-pound ball made of iron and wood with 100 25-watt light bulbs attached to its surface.  At midnight, the ball descended down the repurposed mainmast of the battleship USS New Mexico, with a system of pulleys.”

Today, the ball that is dropped at the top of the Times Building is 11,875 pounds and 12 feet in diameter, with 2,688 Waterford Crystals that refract the lights of 32,256 light-emitting diode (LED) lights.  Now the ball drop is completely controlled by computers

Other celebrations occur throughout the country, many of which are similar to the Times Square celebration.

For example, Atlanta holds the same type of celebration with a giant lighted peach.

In Raleigh, North Carolina, they use a 900-pound brass acorn.

Other objects dropped in other parts of the country include a variety of animals, automobiles, fruit, vegetables, and even ping pong balls in Strasburg, Pennsylvania.

Another tradition is the singing of “Auld Lang Syne”.  According a December 17, 2017 CNN article, the original poem was written by Scottish poet Robert Burns in 1788.  Translated from the Scot language means “time goes bye”.

Tying “Auld Lang Syne” to New Year’s Eve can be dated back as early as 1939, when Guy Lombardo and His Royal Canadians would perform the Scottish folk tune on New Year’s Eve.  They kept it up annually until Lombardo’s death in 1979.

In Scotland, it’s traditional to perform this song not only on New Year’s Eve, but also at weddings and funerals.

Finally, the tradition of college football on New Year’s Day.  The “Tournament of Roses” day and parade were started in 1890.  From the Rose Bowl Stadium website: “Following the parade, young men competed in foot races, tugs of war, and jousts and tourney of rings…”  The first “Tournament of Roses East-West football game” was played January 2, 1902, between Michigan and Stanford.

After the lopsided Michigan victory, the game was not played again until 1916, when Washington State defeated Brown University.  From this time until the era of modern corporate sponsorships, the game was simply referred to as the “Rose Bowl Game”.

Although the game continued annually after the 1916 contest, the original Rose Bowl stadium was not completed until 1923.  It is the same stadium used for the Rose Bowl today, originally built in a horseshoe design and seating 57,000.  Today it seats over 90,000, and the game has been sold out every year since 1936.

From our families to yours, we wish you a Happy New Year and prosperous 2018!!