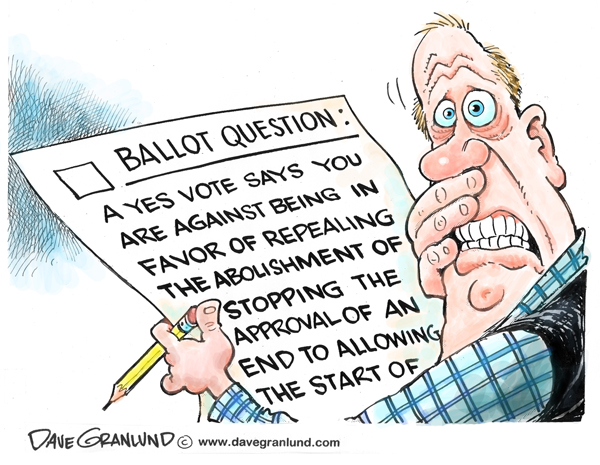 (Chuck Muth) – I haven’t voted yet. I’m still researching a number of lesser known candidates in down-ballot races.  However, I do know how I’m voting on the four statewide ballot questions…

Question 1 is a no-brainer.  It’s nothing but a liberal feel-good measure designed to take one more nibble out of our Second Amendment rights.  While the question sounds good and reasonable, here’s the bottom line…

The proposed background checks won’t stop bad guys from getting guns.  On the other hand, the measure would make it harder, more complicated and more expensive for good guys to buy guns to protect themselves from the bad guys.

Don’t vote “no” on this sneaky victim disarmament measure.  Vote “HELL, NO!”

Question 2 would legalize marijuana.  I’ve been in favor of this measure since June 27, 1979.

On that day I was arrested and thrown in jail for a night for possession of what amounted to two joints of marijuana.  I was ultimately sentenced to 18 months of supervised probation for what was inarguably a victimless “crime.”

And let me assure you, prison changes a man.  I had a bright future on the straight and narrow ahead of me.  Instead I ended up on a path surrounded by some of the most vile, wretched, crooked criminals on the face of the planet: Politicians!

Seriously though, it’s absolutely insane to continue this “reefer madness.”  Pot is every bit as accessible and available today as it was back in the summer of ‘79.  That is, as long as you buy it from, and enrich, violent street drug dealers.

The liberty-eroding War on Drugs has been a miserable failure.  Vote YES on Question 2.

Question 3 is another one that sounds good – energy choice.  And whoever wrote the arguments against it on my Sample Ballot did a ridiculously lousy ham-handed job.  Fortunately, Geoff Lawrence, former Deputy Policy Director for the Nevada Policy Research Institute, makes a far more compelling case…

“While (energy deregulation) reforms should be welcomed, they do not belong in the state constitution.  Constitutions should be limited to fundamental matters of government organization, the rights of citizens, and specifying and limiting the powers of government, etc.

“Under Nevada’s constitution, the legislature already has the power to do all the good things this measure would require.  However, particular provisions of this measure may be found defective or in need of change.  As long as such reforms are done legislatively, they can be remedied timely by the legislature.  That’s not the case if they are enshrined in the constitution.”

Couldn’t have said it better myself.  Vote NO on Question 3.

Question 4 would eliminate taxation on certain medical equipment.  That’s a tax cut.  That means less money for the government.  I like it, I love it, give me more of it!  Vote YES on Question 4.