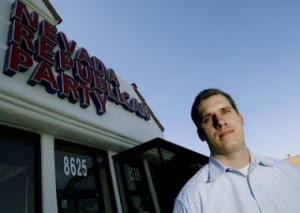 (NN&V Staff) – The Hill, DC’s “insider” newspaper, reports that the presidential campaign of John Kasich has landed a state director with considerable political experience in Nevada to run his Nevada campaign…

Ohio Gov. John Kasich announced on Tuesday that his campaign hired political strategist Zachary Moyle as Nevada state director, a move that signals a heightened focus on other early-voting states in his presidential campaign.

Initially, Kasich’s campaign focused mainly on the first-in-the-nation New Hampshire primary, but has since expanded his strategy of targeting other early-voting states like Iowa. This latest hire suggests he plans to make inroads beyond Iowa and New Hampshire.

Nevada’s Republican caucus will be held on Feb. 23.

If nothing else, the 2016 Nevada GOP caucus is giving a lot of valuable experience to a lot of political mechanics at a very high level of political consulting and management, such as, Ryan Erwin (Jeb!), Jeremy Hughes (Rubio), Robert Uithoven (Cruz), Charles Munoz (Trump), Eddie Facey (Carson) and Carl Bunce (Paul).