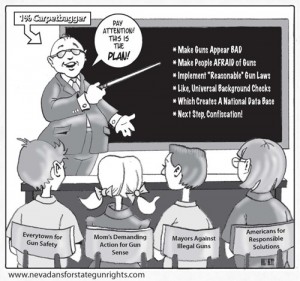 (Don Turner) – The German physiologist Georg Hegel described a process to convince people to agree to a predetermined course of action. The Hegelian dialectic basically states that to get someone to agree with your position, you define a problem (whether it is a real problem or not doesn’t matter), you emphasis the problem over and over again until the statements are accepted and then you propose your solution that will give you the result that you wish.

The progressive liberals have made an art form of this dialectic. Current examples of stating false narratives and their desired manipulated solutions are “universal health care,” “global warming,” “refugees” and “universal background checks” to name a few.

“Universal Background Checks” are the current short term goal for the anti-gun community. As recently expressed by Mr. Obama and Mrs. Clinton, the Australian example of gun control is a good model for what they want to do. This model is confiscation.  Knowing that confiscation of firearms is totally unacceptable to Americans, they and their minions have decided that “death by a 1,000 cuts” is the best way to disarm American citizens.

Their stated three step strategy is: 1. Mandate that all gun transfers (not just sales) be put on federal firearms forms. 2. Require that these forms be centralized, thereby creating a national gun registration program. 3. Using this database, confiscate guns, thereby disarming the public, which is the primary goal.

Their first step is to force all firearms sales and transfers (including private party sales and transfers) to federal firearms licensed dealers (FFL) where gun sales are recorded on federal form 4473. Currently these forms are used for dealer sales and retained by the dealer and not sent to the federal government.  However, once there are “universal background checks” then their next step is a national gun registry, resulting in national confiscation. Without a gun registry, gun confiscation is almost impossible.

Bloomberg’s attempts to accomplish “universal background checks” (UBC) on the federal level were soundly trashed. Realizing that his money can completely overwhelm the grassroots gun community on the state and local level, he has turned his attention to the states. His background check initiatives have passed in Washington and Oregon. He spent $10 million dollars in Washington accomplishing this objective. Nevada is now in his sights.

In 2013, his UBC bill, introduced and championed by Senator Justin Jones was  vetoed by Governor Brian Sandoval at the urging of Nevada gun owners and the Nevada Sheriff’s and Chief’s Association, who went on record in opposition to the measure because the law was unenforceable. Not to be denied, in 2015 a ballot initiative was circulated and signature gathers bussed in from Oregon and Washington were successful in obtaining the necessary signatures to place the “universal background check” on the 2016 general election ballot. This process is now being replicated in neighboring Arizona.

The UBC bill is a very complicated bill, and regulates any sale or transfer of a firearm within the state, with fines and seizures for non-compliance and complications for those attempting to comply. There are several groups in NV advocating for UBC including Everytown, Demanding Moms, and Nevadans for Background Checks, to name a few. They have already put out press releases and held demonstrations to convince Nevadans that “gun violence” is an issue that must be dealt with, and that they have the “common sense” solution.

I like to say that “the war for public opinion is fought on the battleground of ignorance.” The opponents of this initiative use half-truths and downright lies to press their point.  It doesn’t matter that it is already against the law to sell a gun to a prohibited possessor and that it is a felony for a prohibited possessor to be in possession of a firearm. If the voting public knew the truth, this bill would die the death it deserves.

But using the Hegelian Dialectic we are constantly being bombarded by stories of “gun violence.” Their aim is to make the citizens so sick of “gun violence” that they will vote for anything to stop it. And that anything is the UBC on the 2016 ballot.

Last year, Mark Robison of the Reno Gazette Journal wrote an article entitled “Fact Checker: Are gun-background-check claims true?” He summed up the article by stating “Stricter gun background checks may be helpful in reducing gun violence. They may not. But using vague source citations and flawed evidence does not help make one’s case.

Make no mistake, the 2016 UBC ballot initiative is an assault on the Second Amendment and the Fourth Amendment.

The facts are: This initiative is not about stopping criminals from obtaining guns.

A background check is already conducted on the majority of Nevada’s gun sales.

Pay to get your gun back

Will create a loophole, not close one

Be smart, vote NO on the 2016 gun control initiative.