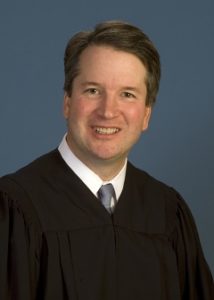 We noted his outstanding record as a lawyer and appellate judge and reviewed his glowing recommendations from legal scholars and colleagues.  He’s a good and decent man with outstanding credentials and judicial temperament.

Above all, we noted that he is mainly a textualist: one who looks to the plain meaning of the words in the law and does not mangle them to fit his ideological agenda as most statist liberals do.  He’s an originalist as regards the Constitution: one who reads the words with the meaning they had when the document was adopted, not what today’s self-styled enlightened thinkers believe the law and public policy should be.

He definitely won’t try to make new law by the dishonest progressive trick of “discovering” new rights or interpretations in the Constitution in order to reach a conclusion he wants.  In fact, he has said that judges who are not at least somewhat uncomfortable with some decisions they’ve made are probably not good judges in the sense of applying the law instead of their preferences.

In deciding qualifications and choices for judicial appointments, most Republicans and nearly all limited-government conservatives are guided precisely by Kavanaugh’s qualities and views.  So, we think, are most Americans.  The tradition that senators voting on judicial confirmations should not ask about particular cases that may come before the courts and nominees should not even hint at answers to such matters supports our view of what confirmation issues should be.

The views of many Democrats, statist liberals, the politically correct and progressives are quite the opposite.  They believe nominees should salute their desired policies and outcomes and fight as political partisans against those they oppose.  Forget textualist, originalist or other jurisprudential principles and judicial temperament.  Either he’s a vote for their agenda or they oppose him.

Their view – Is he for or against my hobby-horse issues? – is a self-interested approach predatory upon the law, the public interest and other people.

One would think, therefore, that “mainstream” press coverage would focus mainly on our majority approach or at least give it substantial coverage.  One would be wrong.  Unless one reads mainly The Wall Street Journal.

Consider a July 23 story in the Reno paper, a subsidiary of the franchise led by uber-leftist USA Today.  In asking Nevada Senator Dean Heller and his election opponent Congresswoman Jacky Rosen about Kavanaugh, it reduces the confirmation vote to a political fight over Yucca Mountain.

The story starts by quoting Heller as having “no reservations” about Kavanaugh.  Then it says, “That Thursday statement came as a surprise to some who thought Heller, a staunch opponent of storing nuclear waste in Yucca Mountain, might be put off by a seemingly pro-Yucca opinion Kavanaugh authored in 2013.”  The paper suggests that the only approach to confirmation issues is the minority leftist politicized view.  And that Heller, a Republican, naturally would adopt that view.

The article focuses not at all on Kavanaugh’s qualifications or the judicial temperament and jurisprudence issues we noted – except to blithely dismiss Heller’s endorsement of them and return to Yucca.

The article is simply wrong in characterizing Kavanaugh’s decision.  His decision was about the authority and duties of federal agencies to act as directed by laws passed by Congress.  It was not “seemingly pro-Yucca” unless one is an extremist ideologue on the issue dishonestly seeking to cast the confirmation in pro- or anti-Yucca terms.

Because Rosen and much of her party are simple-minded extremist ideologues and because they bring an inappropriate and immature approach to judicial appointments – that is, viewing them as fights about particular political issues – they take the view that Kavanaugh’s confirmation is and should be about purely political issues.  For good measure, Rosen doubled down on her approach by also adding abortion and Obamacare.

So, the leftist immature minority view is that everything degenerates into cheap politics, and jurisprudence, judicial temperament, etc. be damned.